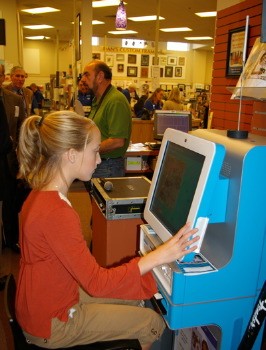 Very slick event at Dan’s Camera City in Allentown Pa. last week and if you missed it, you pretty much missed what photo retail should look like today. The store, nestled within a very suburban area of Allentown (as in residential homes right down the block) played host to what was essentially an HP launch event as the company rolled out their new HP pm 1000 Microlab instant printer and the Z3100 12-ink wide format printer. Members of the press as well as over 80 imaging retailers were in attendance as the event morphed into a PA, NY, NJ PMA member meeting later that evening.

While the equipment HP had on hand was quite impressive and was certainly the centerpiece of the evening (and we’ll get to that in a sec), the headline-stealer on this day was the pure-genius behind the operation of Dan’s Camera City. As customers enter the store they are immediately greeted by HP’s Z3100, 12-ink Designjet wide format printer that is busily cranking out 44-inch prints that look an awful lot like the snap-shots everyday consumers drop off – kids playing, families gathering, etc.

As you wind past the accessory aisles you’ll find camera bags and digital media along with numerous other “accessory essentials” as you make your way deeper into the store. Once past the counter you are stopped in your tracks by the inviting Digi Print Lounge area, a cozy, non-intimidating area with multiple Lucidiom kiosks and a remarkably helpful and accommodating staff. Under the category of “not-leaving-stone-unturned” the kiosks all have little signs sitting on tall stands with the icons “OK” and “?” on each side. When you have a question you flip your sign to “?” and within about 20-seconds help arrives. Toss in some coffee and cookies (and I’m talking really good coffee) and some really comfy chairs for those that bring along a laptop and lookout Starbucks.

Just outside the “Lounge” area were the new HP Photosmart studio kiosks that offer a variety of photo gifting options. Popular fare on this day were the unit’s photo collages as a pair of 12-year twin girls were busy making some nifty collages of a recent school trip to Boston. They were both pretty confident the project would land them an A. The “Studio” was released, as you may recall, along with the ‘HP Express kiosks at PMA back in February.

Just in front of the HP kiosks was a small counter that had the new pm 1000 Microlab instant printer taking print orders from the lounge and cranking out a fade/smudge-resistant prints at 5 seconds a pop. The quality was right on and the service was well run. A small 28” x 30” x 32” footprint enabled staff to neatly hide the unit in a rather small area behind the counter. Spinning around to collect and sleeve orders as they came in from around the store. Additional features on the pm 1000 Microlab include six ink cartridges, 3300 4×6-inch cut sheet capacity and a 15-inch LCD display.

Final pricing for the unit has not been set and is subject to some tweaking. A figure of $11,900 for the unit and accompanying software was tossed around at the event but HP said they are, “still early in the exact pricing structure.”

So then, HP is clearly taking a big ruin at the photo specialty market and company’s Director of Sales in the Digital Photo Division, Dan Kinsley, explained why. “There is still great untapped potential in this channel as so many consumers are just beginning to discover what digital can allow them to do,” he explained. “This equipment is allowing them to easily and quickly realize that potential and this location (Dan’s Camera City) is a perfect showcase for how to properly implement these types of services,” he said.

Before we let this tale come to an end it’s important to note that for all the technology companies like HP and Lucidiom and countless others are brining to the imaging retail world, the staff at Dan’s are clearly the real heroes here. Beyond friendly and extremely knowledgeable, no customer leaves that store in Allentown without a keen awareness of what hey can do today with their digital image files and a contagious “feel good” enthusiasm that they can do it themselves – right in the store, at one of the store’s 20 remote kiosk locations (in surrounding locations like pharmacies or grocery stores), or at home on their own PCs uploading their creation to Dan’s seamlessly-run in-store lab.

Bravo to HP for co-running a press event in a real-world environment and letting the equipment do the talking and a double-bravo to Mike Woodland , Dan’s Camera City owner for allowing his store to be invaded by 100 or so industry folks, most of which left comforted in the knowledge that the photo channel is alive and well and that HP is appears to be hitching their digital wagon to it for the ride.