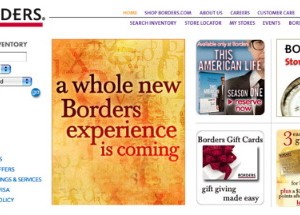 Perhaps no set of retailers knows better about the need to change in order to survive than the photo specialist but as you look around the retail world you’ll see changing times have forced many different sectors to reinvent the way they go about their business.

As consumer reading habits continue to change with sales of eBooks beginning to take flight and more and more consumers spending increasing amounts of time reading online, retail stores such a Borders have had to completely rethink their retail strategy. After posting some serious losses last year, Borders knew it was time to either change or begin to die.

Rather than panic Borders is rolling out a new concept store in California with the hope of grabbing the attention of today’s’ more digitally–enabled readers.

According to an Associated Press poll released last year, that we’re sure Borders and other book retailers are well aware of, one in four adults read no books of any kind in 2006. The AP study also added that those who do read increasingly like their page-turners to be digital. According to the Association of American Publishers, the sale of e-books has grown at a compound rate of 55.7 percent a year since 2002, compared with a 2.5 percent growth rate in sales of paper books.

The 23,000-square-foot store is located in the Westfield Plaza Bonita mall and is actually one of 14 pilot stores being rolled out nationwide, including stores in Oakland and Riverside County.

Included among the new location’s digitally-enhanced offerings is a digital center where customers can mix and make their own custom CDs, download books and music, publish their own books, trace their ancestry and create digital photo scrapbooks.

Borders made the decision, they claim, based on the fact consumers are reading in many ways today and the chain felt it was past time to accommodate these changes. This coupled with the general move in retail to this more “experience-based” model helped fuel the change. The chain’s vice president for the western region, Tim Anderson, was recently quoted as saying, “People want to be excited by their shopping experience – online and in-store – and this concept resonates with the future of retail and what retailers have to do.” Sounds very familiar.

For now, the Borders’ website ( www.borders.com) has a teaser on their home page hinting at the chains’ new direction but no details are provided just yet. Only time will tell if the concept store takes flight but the changes certainly reflect the need for retailers to keep pace with the ever-evolving shopping habits of today’s digitally savvy consumer.