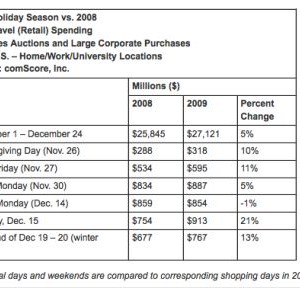 The firm named consumer electronics as a strong growth category, with growth of over 20 percent.

“Online sales growth this year was driven by a continued increase in the number of people buying online, but consumers’ economic challenges resulted in a slight decline versus last year in the amount spent per buyer,” comScore chairman Gian Fulgoni said as part of the announcement.

“The season featured a strong start as a result of early retailer promotions and a very strong finish helped by the snow storms that occurred the weekend of Dec 19 – 20, retailers’ willingness to offer free shipping later in the season, and consumers’ confidence in expedited shipping arriving in time.”

comScore released similar positive numbers about retail Web traffic earlier this week, while it its numbers had topped the previous record as of mid-December.