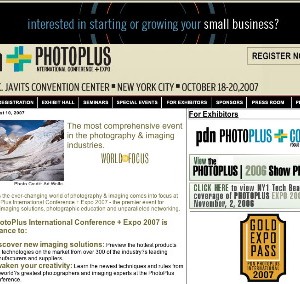 The annual Photo Plus Expo concluded in New York this past weekend and despite what some might say was a smaller exhibition space (if true, it was but a touch tighter) and lighter attendance (again, but by a few heads), the show provided what it always has – a sense the imaging industry is alive and well with new product, new vision and New York!

As for the stories from the trenches…

The DSLR battle between Nikon and Canon has raged on for years and continues to raise the bar in this category with each passing product cycle. However, the two companies have now introduced a new wrinkle to this rivalry – DSLR video.

Soon after Nikon garnered headlines with the first DSLR to shoot HD video, the D90, Canon quickly responded with the intro of the new EOS 5D Mark II, featuring 21 megapixels, ISO that ranges from 50-25.6k, a 3-inchh LCD and, yes, about that video mode…

The resolution checks in at an impressive full 1080, at 30fps, using a full frame sensor for “increased detail” Canon explained. The video they displayed at their booth was rater amazing, shot by Vincent Laforent and it really displayed the new versatility this camera affords the pro shooter – a camera that can handle big time video applications along with everything they’ll ever need for their still business.

The interesting times w are living in within the DSLR category keep getting more and more interesting. You have to know this Nikon and Canon volley will only heat up in the months and years ahead. Nikon held a press conference of their own, partly to continue to gush over the accolades that D90 and D700 are receiving and partly to let the press know that more major announcements in this arena are forthcoming. Stay tuned as we’ll be taking a closer look at the entire DSR category in the December issue of Picture Business.

On the output side of the equation …

Noritsu continues to produce printing solutions that answer the call of retailers looking to offer their customers higher quality prints and photo gifts through equipment that can produce it faster, cheaper and use limited floor space. While the D701 did that and then some, the new D502 adds duplex printing to the equation. This is yet another compact model in the company’s stable that that now offers retail the ability to produce custom calendars, photobooks greeting cards and the like with high speed duplex printing.

Noritsu’s President, America Corporation, Akihiko Kuwabara, spoke about offering “complete solutions” rather than just product as the core of the company’s mission statement moving forward. “The retail print market is demanding more than just print capability in new equipment,” he began. ‘They need complete printing solutions. Noritsu is now offering machines like the D701 that offer the scalability many retailers are looking for as well as the new D502 that moves them into the value-add print market. And our front end kiosks like the CT-SL allow our customers a consumer-friendly digital input terminal that fits well into any retail environment.”

The company’s QSS-35 Plus series minilabs and M300 printers certainly round out a product portfolio that is keeping Noritsu top-of-mind in this market as retail printing continues to gain steam.

Another company hoping to take advantage of the spike in retail printing is Mitsubishi and they continue to improve on the user interface of their DPS Click and Kiosk units. The sell through here has always been, “Quick and easy revenue” and the company had exactly that on display at Photo Plus. The printers driving these units (the CP-9550DW and CP-3030DAU – dye sublimation thermal transfer) continue to produce high quality prints with ever-increasing print speed

Mitsubishi-Imaging’s marketing specialist, Darla Achey, told us the company remains ready for a market that may some fairly radical changes in the months and years ahead.

more stringent with their spending. New technology such as digital photo frames make it more cost effective for the consumer to display their photos eliminating a need for printing and storing. We are also watching the trend grow in photo merchandise products which puts a greater focus on the cool photo novelty item rather than the typical 4×6 prints,” she explained, adding, “As we watch the market change Mitsubishi will continue to adjust and look for opportunities to partner with other companies that will bring

extra value to our products.”

Fujifilm, with a scaled-back booth for 2008, unveiled the DL410 Frontier Dry Minilab. The company explained the intro as a “response to the growing interest in inkjet-based solutions.” This latest addition to the “standard-setting Frontier line of photofinishing lab solutions further expands a retailer’s ability to deliver high quality photo prints to consumers,” the company explained. The release of the new inkjet-based digital lab comes as increasing consumer demand for prints at retail is presenting retailers with growth opportunities.

Sony also grabbed some attention with the intro of their new SnapLab, the UPC-R20L. Referred to as a mini-kiosk, the new unit produces 3.5×5; 4×6; 5×7 and 6×8-inch photos in either glossy or Pro-Matte finishes using the same media roll. The sell-through here: “Maximum profit, minimal space” Retailers have always loved that one.

Elsewhere around the show floor….

An entirely new approach to doing business, along with some entirely new products, were rolled out from LensBaby. Even the company name and logo have changed (from the previous Lensbabies). The company’s president and cofounder Sam Pardue claims that DSL photography, “is really about being creative, that where the fun lies in all of this.” With that in mind the company set out to simplify both their products and their marketing messaging. The result is their array of new “selective focus” lenses, the newest of which is the Composer, which features easily swappable optics that are sold as part of an Optics Swap system. Each gives the user a different effect so the purchase of the kit provides four lenses in one. “We like to think this kit isn’t about buying extra lenses for a DSLR,” Pardue added. “It’s about adding to the customer’s creative process and making that as easy for them as possible.” Mission accomplished with the new optic swap system.

A company called ScanDigital showed up at Photo Plus for the first time demoing their new service that, “digitizes visual media”, including photos, slides, and film. They also told us they add color correction, correct orientation, remove artifacts, and fix red-eye along with the digitizing part of the equation. They also promise turnaround in under a week. The service works thusly – You place an order at ScanDigital.com and prepay for shipping and print out a UPS shipping label directly from the site, The user then packages their “visual media” and sends the package off to ScanDigital.

The company then scans the contents and ships the material back along with a DVD with all of the high resolution scans. They also setup an online web gallery so the users can view them and order prints online. Very basic set-up and a service that caters to a growing number of consumers that are discovering they want to bring large collections of old photos back to life. They mentioned that they are also looking for retail partners as well.

Jessica Claire is a professional photographer who was always bothered by how long it took her to locate and change lenses when she carried her gear around in today’s typical camera bag. Well, se recently did something about it in the form of Shootsacs, which are essentially carrying cases designed strictly for camera lenses – with a bend toward women design-wise. Retrieving lenses from within the bag is real easy as they are stored in tight but open pouch. Lift a flap and there they are. The cover flaps are also interchangeable.

Among the cooler gadgets we spotted was Argraph’s new MemoryKick MediaCenter, a handheld photo viewer that features 30GB, 60GB and 120GB sizes. This palm-sized device can display images/video, store images/video, transfer images/video from one format to another, includes slots for all the popular memory formats, USB connectivity, play and organize music files, create slideshows, A/V out feature for TV hook-up and on and on it goes. At approximately $300, Argraph may have a Holy Grail-ish device here.

Look for more information on what made headlines from Photo Plus in next week’s Digital Clique. 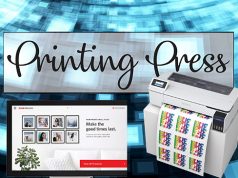