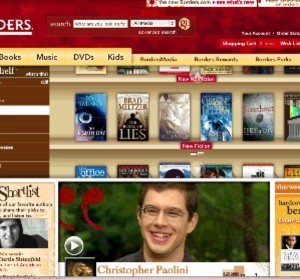 Not unlike many national retail chains that have had to reinvent themselves in an effort to rise above this difficult economy in 2008, Borders recently opened its first concept store in Allen, Texas. The new store is big on interactive features as well as imaging/electronics fun and games.

However, the chains’ zone vice president, Bill Christensen was recently quoted as saying, “We’re not trying to be Best Buy. But this isn’t just a bookstore. Eighteen months ago, we started researching with our customers what else we could be.”

Apparently the answer back was, just about anything.

The two-level location is now broken up into several interactive departments such as travel, cooking wellness and several other different “lifestyle” areas. There’s a mural on three walls in the children’s department by author and illustrator Colin Thompson and the

Manga department, featuring Japanese comic books is, we are told, “run by a real enthusiast,” only adding to that area’s appeal.

This concept store has also added a digital center that offers primers on many of the latest cameras and other consumer electronics products. Shoppers can burn their own CDs, make audio books and learn how to do what the location refers to as “picture books”. There’s also a self-publishing kiosk.

In the travel department, a program allows people to find a vacation spot by entering criteria. Once a spot is picked, it lists festivals and major sporting events happening there in the next year and encourages customers to take lots of pictures for a return visit to the camera center.

Borders has been fighting competition from online booksellers such as Amazon.com and expanding book departments at places like Wal-Mart, Costco and Target. This concept store effort is an attempt to separate the chain from the “book store only” tag to something a bit more compelling to shoppers.