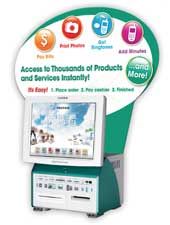 This year’s trend for photo kiosks is best described as multitasking. Several companies have expanded their photo printing services—from pocketsize photo albums “ready in five minutes” to high-tech online storage options. Access to social networks will give consumers a larger image pool from which to create their books, cards and mugs, while prepaid gift cards and bill-payment services will create more incentives for customers to visit your store. Here’s a brief glimpse of what you’ll see this year in new photo kiosk features and products.

A free-form composer also allows users to create their own custom products from a full suite of Fujifilm imaging products, including photo books, calendars, collages and more. A flexible software platform gives retailers the ability to download the latest versions of software and instantly access new products, while “on-demand” prepaid card printing provides a wider variety of cards—thus eliminating the need for inventory. Customers can order the cards they want, when they want them. Additional details will shortly be made available. fujifilmusa.com

HP is expanding its photo publishing capabilities to reach beyond the kiosk onto the Internet—allowing consumers to do more with their images and enabling retailers to capitalize on the growing retail publishing market. Customers at 2,600 Walmart stores and all Meijer stores throughout the U.S. can now order creative photo merchandise, in-store or online, for same-day pickup. Using HP in-store kiosks, Walmart customers can access their photos from HP’s online service, Snapfish.com, as well as Walmart.com and, soon, Facebook accounts.

Snapfish customers will find it simpler to access their favorite photos due to a new online photo organizer that uses sophisticated algorithms to detect and identify people’s faces. Unlike other facial recognition applications that only recognize adult faces, the Snapfish software is capable of detecting babies’ faces and tracking changes as they grow. As the children grow older, the software recognizes and groups their faces together. Once the user opts into the facial recognition feature and tags certain people, the algorithm recognizes the person in subsequent photos and assigns the appropriate name tag. A group of images is then created for each tagged person.

Additional online photo organization features include: larger thumbnail views of photos; ability to caption, rotate and edit photos in batches; easy sharing to social networks; and new searching capabilities across all albums to easily find photos by occasion, date or tags. For example, once a photo is tagged by event, it’s easy to find that event within a large set of photos, making it simpler to choose images when creating photo books or calendars based on occasions. hp.com

Mitsubishi Electric Visual Solutions America’s Mini Photobook Maker—integrated with the DPS Kiosk 7000—can use photo files obtained from digital storage devices or downloaded from social websites such as Facebook and Picasa to create, print and assemble pocket-size mini photo books.

The Mini Photobook Maker kiosk prints and assembles 10- to 30-page books in just five minutes. Custom page formatting allows users to easily move photos from page to page, add text for captions, and chose from a wide range of borders and backgrounds. Consumers can also improve their images with photo-editing tools for cropping, red-eye removal and color correction.

Lucidiom is highlighting its new Facebook/iOS Connect options for the APM kiosk. The Facebook feature, originally introduced for APM v7.5.1 in January 2011, allows consumers to access their Facebook accounts at the kiosk and use photos from one or more Facebook albums to make prints, photo books, calendars, cards and other products offered through the kiosk. Users can also upload as many as 200 pictures at a time from the kiosk to Lucidiom’s Photo Finale Web or their Facebook accounts and create posts to accompany the photos. This upload option allows both the retailer and customer several options for sharing the uploaded pictures, including the ability to reorder prints and gifts from the originating retailer.

New this year is a feature called ColorFlow, which can be used with any third-party color correction station or software. ColorFlow allows retail operators to color correct images before they’re output as prints, books, calendars, cards or other creative products by fine-tuning color and density. Operators can also edit products, should the consumer make a typo. The operator simply sends the job to the correction software then pulls it back into the order for fulfillment, so it’s no longer necessary to color-correct every photo on every page, as is the case with many correction programs.

Kiosks using Lucidiom’s APM software support BlackBerry and Android phones as well as Apple’s iOS Connect. Users simply plug in their iPhones to the kiosk and use images stored on the device to order any product offered on the kiosk. Photo retailers can also use Lucidiom’s new Pocket Pics Version 2 to connect the iPhone to their Photo Finale website for uploading, ordering, syncing and sharing images. Retailers can brand Pocket Pics as their own application.

Eastman Kodak Company is marketing new features from its latest Picture Kiosk software, Version 5.0, introduced last fall. Among the improvements is an enhanced Facebook application that allows consumers to access images from their own, as well as friends’, shared Facebook albums (according to Facebook privacy rules) and from other imaging websites like Google, Picasa and Kodak Gallery. Images can be used to create either prints or personalized photo products on the Kodak Picture Kiosk.

Version 5 also features Kodak SmartFit technology, which automatically creates a photo book in seconds. SmartFit organizes and places photos in a book template, then allows the client to print the book immediately or make adjustments to the layout. It also supports customizable captions and a new photo book project preview that displays virtual pages as they’ll appear in the finished product.

“These new enhancements offer consumers easier access to their images, better tools for creating personalized products, and more choice and convenience in how they order and receive products,” says Larry Trevarthen, director of Marketing for Kodak Picture Kiosks.

Kodak Express Book Portfolio offers both single- and double-sided printing on XtraLife laminated paper, along with a wider range of book formats (landscape, portrait and square) and sizes up to 30.5×20 inches.

Consumers will also be able to take advantage of an expanded media storage solution that allows them to save digital photo files and videos from cameras, USB drives, memory cards as well as social-sharing sites like Facebook. Data is stored on a 4GB DVD, which can be viewed on personal computers, DVD players and the Kodak Picture Kiosk. kodak.com

The 4×6-inch MyPocketbook albums can hold as many as 30 pages. The customer chooses the background, book title, cover picture and the order the images are arranged (chronologically according to the order they are uploaded). The touch-screen monitor guides users through the process, with an estimated production time of approximately five minutes, according to the company. Editing functions include zoom, rotation, red-eye correction, black-and-white and sepia conversion and luminosity correction.

Editor’s Note: The State of Our Industry 2022