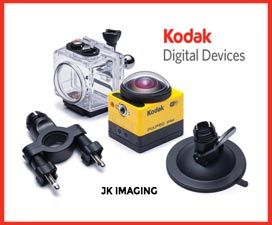 “The SP360 action cam revolutionizes this sometimes cumbersome process and streamlines what really matters, capturing users not only doing what they love, but them engulfed in doing it,” said Mike Hackett, executive vice president, JK Imaging, Ltd.

The action cam is designed to go beyond capturing fully immersive, 360º HD video by adding a level of interactivity with free, de-warping app software for Mac or PC systems. The app allows owners to edit their content after capture. Once the HD video is downloaded from the SP360 to a computer, users can pan and select various viewing angles. They can then save them as new video files. They can also select individual frames from different viewing perspectives in the HD video and save them as high-resolution photos.

The SP360 is equipped with a motion sensor setting to automatically trigger recording when it detects movement. In addition, the device is Wi-Fi enabled. This is to enable a connection to a smartphone, smart device or computer (iOS 6, Android 4.0, Mac OS X10.9, Windows 8/7 or higher). The smart device can then act as a remote control or for viewing content shot up to 65 feet away.

Weighing 3.63 ounces, the action cam is splashproof, freezeproof (-10º C), shockproof and dustproof. It is compatible with microSDHC memory cards, Class 6 or higher and up to 32GB capacity.