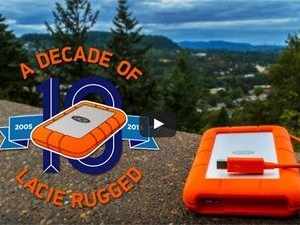 Cupertino, CA—LaCie, the premium brand from Seagate Technology, revealed a series of sketches and stories from designer Neil Poulton to commemorate the 10th anniversary of its Rugged drive. In an infographic, LaCie shared the evolution of its hard drive from the birth of the concept in 2005 to its popularity with Apple users and “its ubiquity on movie sets and photo shoots.”

For the first time, Poulton shared the painstaking process behind the original design. This included countless revisions and some of the challenges with early design concepts. He also looked back at his inspirations for the product designs, including a basketball and the Spectrum Pursuit Vehicle, the tank-like vehicle from the 1967 TV show Captain Scarlet and the Mysterons.

“The Rugged was an instant classic,” said Neil Poulton, renowned Scottish industrial designer. “But where we’re going now is more interesting than where we’ve been.”

LaCie highlighted the Rugged drive’s tech milestones. Key indicators include leading speeds and capacities, the latest interfaces and biometric access. From 80-gigabyte to 4-terabyte capacities and from USB 2.0 to Thunderbolt, Rugged drive’s history showcases the evolution of digital storage. To see the design inspiration and technology behind the Rugged drive, visit lacie.com/realrugged.