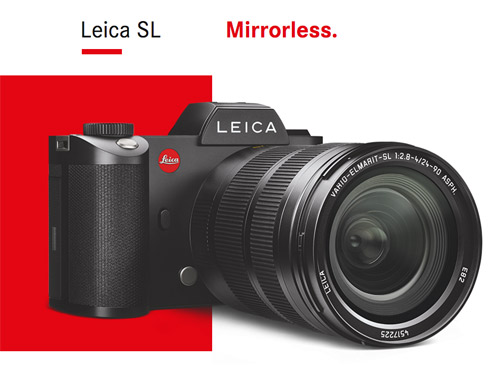 The electronic viewfinder is the first to feature Leica EyeRes technology, developed to produce “a latency time below the threshold of perception, an impressive resolution of 4.4 million pixels and a magnification reminiscent of a medium-format camera,” notes Leica. The EyeRes viewfinder is activated by looking through it, and the final image is visible in the viewfinder before the shutter release is pressed.

In addition, the Leica SL features a 2.95-inch back display with a viewing angle of up to 170° for composing and reviewing images as well as touch-screen menu navigation.

The camera’s sensor pairs with a Leica Maestro II processor to create “impressive dynamic range, excellent contrast rendition, exceptional sharpness, the highest resolution, and noise-free images in almost all lighting conditions.” Together with 2GB of buffer memory, the processor makes it possible to capture consecutive full-res 24MP images at 11 frames per second and 4K video at 30 fps. Pictures can be saved simultaneously to an SD card as both a JPEG and DNG in support of the UHS II standard. In addition, the shutter provides speeds from 30 minutes to 1/8,000 sec, and the camera’s sensitivities settings max out at ISO 50,000.

Video recording capability includes UHD at 30 fps, Cine4K at 24 fps and Full HD at up to 120 frames per second, making use of the entire sensor area. As soon as the camera is in video mode, the display shows only relevant information for video recording, such as safe area, aspect ratio, zebra function or the recording level of the microphone. An optional audio adapter allows users to connect an external microphone and the audio recording level can be set without accessing the menu. Videos can be output in 4:2:2 10-bit in 4K resolution over HDMI 1.4.

With integrated Wi-Fi connectivity and GPS, the Leica SL’s body is built for use in harsh conditions. It’s machined from solid aluminum, and seals around controls and in the lenses provide protection against dust and moisture. In addition, ultrasonic sensor cleaning removes dirt from the sensor, and the glass covering the back panel display is scratch-resistant and has an antireflection coating.