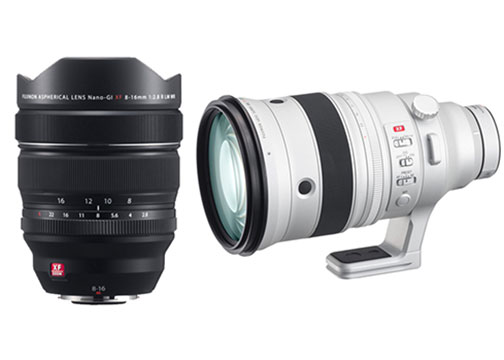 Designed for edge to edge image-resolving performance, this lens is targeted at landscape and architecture photography, such as interior and nightscape. It is also suitable astrophotography.

Also featured is a floating lens element that adjusts according to the position of the zoom. As a result, the lens corrects field curvature that is typically found in ultrawide-angle lenses.

Furthermore, its lens barrel is lightweight and sealed at 11 points for weather and dust-resistance. It is also capable of operating in temperatures as low as 14°F.

Other features include the use of linear motors for quiet, fast autofocus. Nano-GI coating on the rear surface of the two front lens elements helps eliminate ghosting and flare caused by oblique light.

This is the first superfast telephoto lens in the XF lineup. Moreover, it is compatible with all Fujifilm X-series interchangeable-lens mirrorless cameras.

It offers a maximum aperture of f/2.0 and a focal length equivalent to 305mm. “The lens boasts exceptional image clarity with the ability to produce beautiful bokeh, making it an ideal lens for shooting sports and wildlife,” Fujifilm stated.

The XF200mm f/2 R will only be available as a kit, paired with the XF1.4X TC F2 WR teleconverter. The teleconverter extends the lens’s focal length by 1.4x to cover a 427mm equivalent at f/2.8.

The telephoto lens is made up of 19 elements in 14 groups. It employs one large-diameter super ED lens element and two large-diameter ED elements to minimize chromatic aberration. Moreover, a polishing technology developed for broadcast lenses is applied to the large-diameter lens to increase image-resolving performance and bokeh.

Also, a new focus preset function instantaneously changes the focus to a preset position. As a result, photographers can capture the main subject without making focal readjustments.

In addition, the XF200mm f/2 features a new mechanism that fixes the motor group when the camera is not in use, to reduce movement of the focusing group. It also offers 5-stop image stabilization performance that recognizes shooting conditions and automatically applies optimum IS control.

Made of magnesium alloy, the lightweight lens is also sealed at 17 points. Weather and dust resistant, it also can operate in temperatures as low as 14°F.

Other features are: linear motors; fluorine coating on the front element for improved durability; and a matte silver color to reduce overheating. The kit will be available in late October with an SRP of $5,999.95.