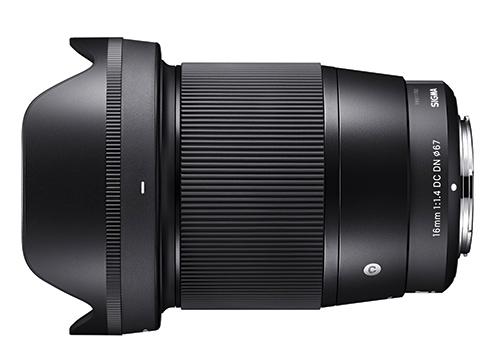 Over the years, Sigma has developed a lineup of bright prime lenses ranging from wide-angle to telephoto. For mirrorless cameras, the company is developing a range of interchangeable lenses that feature a lightweight, compact package for daily shooting.

The new large-diameter, wide-angle lens reflects that lightweight, compact design. And, like all Sigma’s DN lenses for mirrorless cameras, it is engineered to deliver “superior performance covering the key focal lengths,” the company announced. In addition, it allows increased control over depth of field for selective focus control. With a rounded, 9-blade diaphragm, it also produces pleasing bokeh.

In addition, its optical design and stepping motor are built to deliver smooth autofocus during video shooting. Furthermore, the mount features a special sealing for a dust- and splashproof design. The lens is also constructed using a Thermally Stable Composite (TSC) material for use in wide temperature variations.

The Sigma 16mm f/1.4 DC DN | Contemporary lens has a suggested retail price of $449. In addition, it comes in both Sony E and Micro Four Thirds mounts.

Sigma lenses with DC in the name are designed for optimal performance on cameras with APS-C image sensors. When a DC lens is used with a camera with a full-frame image sensor, vignetting will occur. Photographers are advised to adjust image area settings for optimal image results.

Furthermore, Sigma lenses with DN in the name are designed for optimal performance on cameras with a short flange back distance. sigmaphoto.com