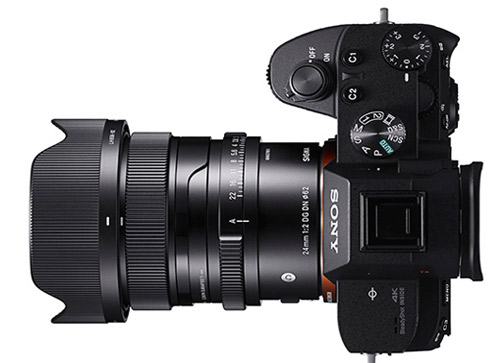 Available in  L as well as Sony E mounts, the lens delivers edge-to-edge rendering in an ultracompact, all-metal body. Moreover, it is the latest prime lens Sigma added to its I series. It joins the just-announced 90mm f/2.8, featuring an f/2 aperture, an all-metal build and a manual aperture ring.

The combination of the 24mm lens’s optical design, f/2 aperture and wide angle of view makes it an option for night sky, event as well as interior photography. Owing to its compact size, it is also portable enough for day-to-day use.

Moreover, the lens boasts a 13-element, 11-group construction. It uses two SLD (super low dispersion) glass elements and one FLD (fluorite-equivalent) glass element to correct axial chromatic aberration. It also incorporates two high-precision glass-molded aspherical elements. This is made possible by the processing technology of Sigma’s production facility in Aizu, Japan. In addition, the number of lens elements was kept down and the size and weight of the lens reduced, while providing correction of aberrations.

“In anticipation of wide-angle lens applications, Sigma’s optical designers have ensured the lens resolution is extremely high,” the company announced. “And it is uniform from the center to the periphery of the image. Sagittal coma flare is also well suppressed, giving the lens a high degree of rendering power that makes it ideal for night sky photography.”

All I series lenses have an all-metal construction. Precision-cut aluminum parts not only give their barrel a stylish finish but also provide durability. Internal structures that slide with the operation ring are also metal. Sigma’s cine lens lineup for professional cinematographers also uses these components. In addition, they provide a tactile, ergonomic feel.

Furthermore, the cover ring between the focus ring and the aperture ring has hairline processing; this is adopted from Sigma’s Art line. This covering also functions as a finger hold when attaching or detaching the lens.

Other features include an inner focus system; compatibility with high-speed autofocus, and lens aberration correction; support for DMF and AF+MF; super multilayer coatings; an aperture ring; a focus mode switch; as well as a dust- and splash-resistant mount.

The new lens also comes with several accessories. They include a petal-type lens hood (LH656-02); a magnetic metal lens cap (LCF62-01M); as well as front and rear caps.

The Sigma 24mm F2 DG DN | Contemporary I series lens has a suggested retail price of $639.