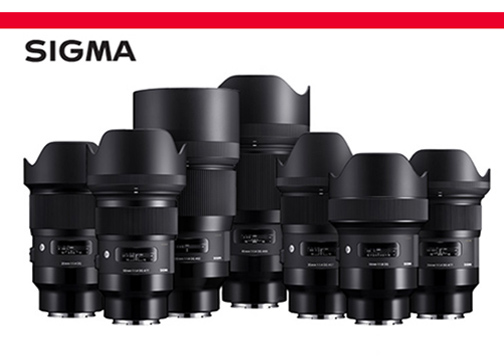 While offering the same high-performance optical design as other lenses in the Art line, these Sony E-mount models will feature a newly developed control algorithm. This algorithm was created to optimize the autofocus drive and maximize the data transmission speed.

In addition, these lenses will be compatible with Sony’s continuous AF (AF-C) and high-speed autofocus, which are not addressed by the Sigma MC-11 mount converter. Like the MC-11, the lenses will be compatible with in-camera image stabilization and in-camera lens aberration correction. This will include corrections for peripheral illumination, chromatic aberrations and also distortion.

The new lineup will include the Art set of seven prime lenses covering 14mm to 135mm. It will also include two models that Sigma will be exhibiting at CP+ 2018: the 70mm f/2.8 DG Macro | Art and 105mm f/1.4 DG HSM | Art. Furthermore, Sigma plans to introduce additional Sony E-mount models in the Art line going forward.

The following Sigma lenses will be progressively released at dates yet to be announced. Pricing will also be announced at a later date.

As a result of an autofocus drive control program tuned for each lens and high-speed data transmission, the lenses will offer high-speed autofocus at the same performance level as that of a lens designed exclusively for mirrorless cameras.

The lenses also will be fully compatible with in-camera aberration correction, including corrections for peripheral illumination, chromatic aberrations and distortion. This function was added to take image quality to an even higher level. It matches corrections to the optical characteristics of the lens.

Another feature is that the mount will be made native to the lens, to result in a more rigid and stable feel to the lens.

In addition, featuring a special surface treatment to enhance strength, the brass bayonet mount is said to offer a high-precision fit and durability. Moreover, the mount connection area incorporates rubber sealing for a dust- and splashproof construction. sigmaphoto.com