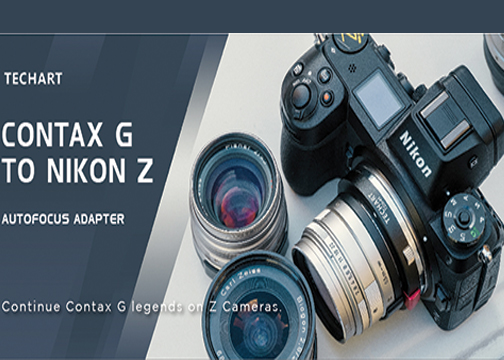 The adapter motor drives screw onto G lenses to initiate the focusing mechanism. Subsequently, AF-S and AF-C are supported as shooting modes. In addition, the adapter also realizes manual focus.

The Contax G series were prime lenses launched in 1994 to support G1 and G2 rangefinder cameras. Each of the lenses is light and portable with classic optical designs and autofocus functions. Now, Nikon users can enjoy the unique shooting experience of Contax G lenses with the new TZG-01 AF adapter.

Along with support for AF-S and AF-C modes, including face, eye and animal detection, the adapter also supports dynamic area AF, auto-area AF and single-point AF. The Techart TZG-01simulates the autofocus mechanism operation of Contax G cameras to their lenses. Moreover, the brushless motor drives the screw on G lenses that controls the movement of glasses to achieve focus.

In addition to a release button, there is also a dial on the side that allow users to manually adjust the focal point. What’s more, it is for minor adjustment of the focus point in autofocus mode and realization of manual focus.

Furthermore, the adapter consists of aircraft-graded aluminum and copper alloy. In addition, the ring is light but tough, achieving a balance between weight, mechanical operation and precision.

Moreover, Techart applied an internal flocking to eliminate any possible reflection of lights. The lens release tab is also approximated to the one on Nikon cameras, with less than a 0.01mm tolerance to ensure a smooth installation of the lens. Techart also upgraded the CPU to a 32-bit ARM unit. Consequently, data transmission and thus focusing performance are faster.

The TZG-01 adapter employs a brushless motor. The advantages of a brushless motor are a high power-to-weight ratio; high speed; nearly instantaneous control of speed (rpm) and torque; high efficiency; as well as low maintenance, according to Techart.

In addition, photographers should set the aperture value in the camera into dedicated values with respect to the focal length of the lens, to maximize IBIS performance. Contax G lenses are manual aperture lenses, so that the setting of the camera aperture will not affect the shooting exposure.

The TZG-01 adapter is also firmware upgradable. A lens-cap–like USB update hub is included in the box. Users can connect the update hub with a computer via a Micro-USB cable. They may then download the firmware update software from the Techart website.

The retail price of a Techart TZG-01 autofocus adapter for Contax G to Nikon Z cameras is $299.