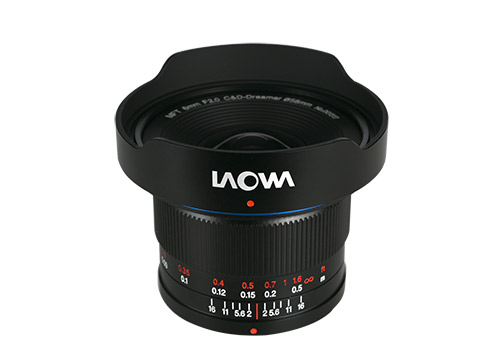 Anhui, China—Venus Optics is now offering a photography version of their 6mm T2.1 Cine lens. The new Laowa 6mm F2 Zero-D MFT has the same image quality as the cine version, however, it offers other features.

The new lens integrates electrical contacts that allow users to control the aperture through the camera body. This also enables the recording of EXIF metadata. Moreover, the tiny 6.4-ounce lens captures a 121.9° angle-of-view with close-to-zero distortion. It also features an f/2 large aperture and a 3.5-inch closest focusing distance.

“The Laowa 6mm f/2 Zero-D is a breakthrough as the widest rectilinear option in the MFT market,” announced Venus Optics. with a 121.9° ultrawide angle, the lens permits users to capture more details in a scene as well as exaggerated perspectives in tight space. As a result, the new lens is a solution for architectural and landscape photography as well as astrophotography and drone shots.

Furthermore, its optical design contains 13 elements in 9 groups. Two aspherical glass elements control distortion to the minimum. In addition, the large aperture of f/2 increases the flexibility of the lens to shoot under dim light conditions. Along with its 5-bladed aperture, it is also easier for the lens to separate the subject from the background.

Moreover, a 3.5-inch close focusing distance permits photographers to get very close to the subject to create visually impactful images. It is also favorable in creating shallower depth-of-field images when shooting close-ups. Consequently, it can create a stronger bokeh effect, aided by its 5-bladed aperture diaphragm.

What’s more Venus assembles the Laowa 6mm f/2 MFT with a CPU chip and motor. The focus magnifier is triggered for easier focusing when rotating the focus ring. It also allows the adjustment of the aperture via the camera body.

Another feature is a 58mm filter thread to screw in a circular filter without the need for filter holders. Furthermore, the lens’s five aperture blades also generate 10-point sunstars by stopping down the aperture.