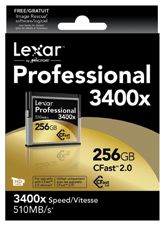 “Our Professional 3400x CFast 2.0 card offers content creators the right storage solutions to keep up with the demands of 4K and beyond cinema-level videography,” said Adam Kaufman, director of card product marketing, Lexar. “With industry-leading write performance and capacities, we are excited to know that the next generation of content will be captured on Lexar memory cards.”

The cards enables the capabilities of next-generation, cinema-grade production cameras and operates at performance levels necessary to capture high-quality 4K and beyond video. Available in capacities up to 256GB, the cards can capture RAW and ProRes video now demanded by the industry.