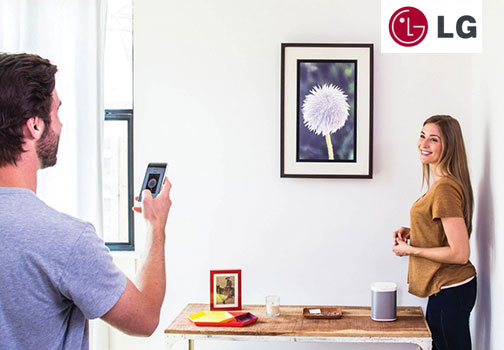 Acanvas is a Wi-Fi connected, customizable digital frame that hangs on any wall, charges itself and streams art and photos into consumers’ home. The start-up, which launched as a Kickstarter campaign to fund its completion, will focus on developing its art-streaming platform into a viable business. The platform contains millions of licensed works of art displayed in cord-free customizable digital frames on which consumers can also display their photo collections.

It features a “first of its kind” smartphone app (iOS/Android) that uses curated Art Stations to stream artwork from various artists and genres. Consumers can also display their own imagery by accessing their camera roll though the Acanvas app. The mobile app also allows users to crop images for display on the screen. The digital frame’s onboard battery means users won’t have to worry about unattractive wires or difficult installation, and it recharges on its own.

The Acanvas frame is offered as a 23-inch, Full HD 1080p LCD screen with a superwide viewing angle. It can be hung without a frame or with a black-brown or silver matted frame the company offers. Or a custom frame can be built to match any decor. Also, multiple frames can be controlled through the Acanvas app. Images can either be split across multiple frames or create a unique grouping of three for larger walls. Special triptych pricing is available during the campaign.

Acanvas will initially target North America with plans to expand to other markets next year. Like LG’s other spinoff—Infit & Company, a medical product that diagnoses conditions—Acanvas will be managed separately by former LG employees. They will be responsible for their own fundraising and strategy while LG will provide use of the patented technology.

“These ventures are indicative of the kinds of innovations coming from our labs, and unleashing them as independent startups speaks volumes about LG’s commitment to Open Innovation,” said Mohammed Ansari, LG Electronics USA’s vice president and head of the LG Silicon Valley Lab.

To show its support for the venture and to help alleviate a major risk associated with start-ups, LG promised employees who join either of the two new companies that they will have guaranteed positions at LG if they should decide to return within three years.

The Acanvas frames can be preordered through Kickstarter. They cost $299 and $399. The first shipments will go out to iOS-enabled Kickstarter backers in October 2016, followed by shipments to Android-enabled backers in December 2016. lg.com