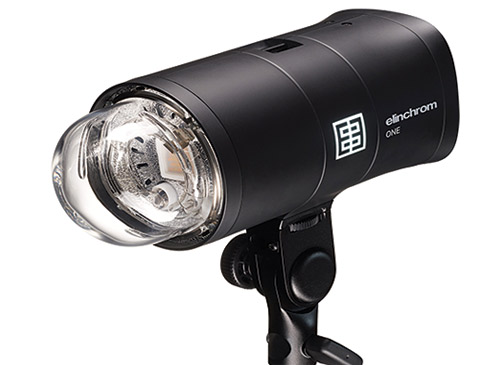 Renens, Switzerland—Elinchrom introduced the portable Elinchrom One. It is the company’s first battery-powered monolight. The monolight was developed as part of a company-wide effort to define Elinchrom’s modern identity.

“The entire team has gone to great lengths to ensure the One features several unique, future-facing attributes while still retaining the brand’s core values,” the company announced. “For Elinchrom, the One is more than just a long-requested new product; it is the beginning of its next adventure.”

The monolight adds the versatility of an off-camera flash to light–shaping capabilities while maintaining a minimal footprint. Similar in size and weight (3.3 pounds) to a 70–200mm lens, the device is travel ready. Furthermore, its two-way metal tilt-head with a 7–8mm umbrella mount detaches; subsequently, the Elinchrom One is ergonomic for hand-holding.

Moreover, the device utilizes an internal Li-ion battery for portability and enhanced protection from the elements while on location. Plus, users are not tied to proprietary spare batteries or chargers; they can charge the monolight from any USB-C source. Further, due to active charging, users can connect it to a power source and continue shooting while charging, regardless of the battery’s power level.

In addition, the monolight is capable of producing 725 full-power flashes on a single charge; consequently, it is an option for longer shoots.

The monolight also utilizes its 131Ws capacity to generate a light output usually seen in 200+ Ws units. At 3.3 feet and 100 ISO, specs state it can achieve f/11.9 with the diffusion dome attached. When combined with the HP reflector, the achievable f–stop climbs to f/5.2.

Another feature is its touch–screen interface with a newly designed, streamlined menu structure. Plus, TTL with manual lock enables a quick switch from TTL to manual without losing exposure settings.

Other specs include a bicolor LED modeling lamp; adjustable color temperatures of 2,700 to 6,500 with an output of 3,000 lumens and CRI 95; a recycle time of 0.9 sec at full power; the ability to maintain a +/-150K color temperature over its power range; sync up to 1/8,000s with HSS; freeze motion, overpower ambient light as well as darken backgrounds; and a smart pro-active cooling system.