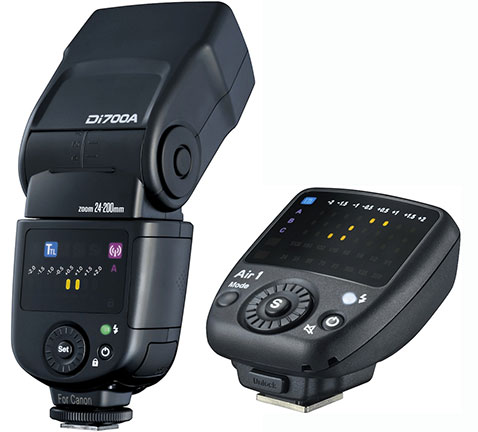 “As with the other 700A products, these new flashes will be sold as a kit and individually,” said Bruce Michelsen, director of sales and marketing for New England Imaging Distribution (NEID), the new exclusive distributor for Nissin in America.

In a related announcement, Michelsen said that Nissin’s Air 1 commander also would be available as a stand-alone item for both Fujifilm and MFT systems.

The Air 1 commander has eight different radio channels to choose from in the event that there is interference on a given channel. It will control up to three groups of flashes: A, B and C. Multiple flashes can be set to each group. The Air 1 commander unit also can control the flashes in TTL or manual settings. In addition, it allows the user to control the zoom head of the Di700A.

Suggested retail pricing for the Di700A (Air) flash for Fujifilm and for the Micro Four Thirds versions is $259. A kit with both has an SRP of $299. The Nissin Air 1 commander for both systems retails for $89.99.