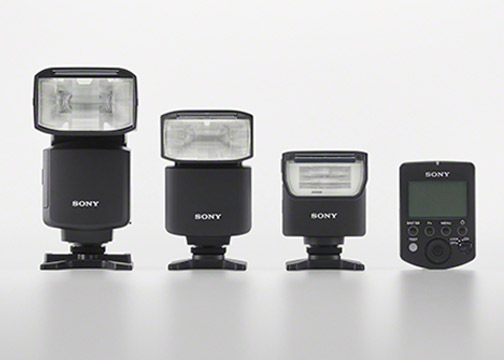 Both are wireless flashes that offer precise control, enhanced high speed as well as intuitive operability. They are marketed for both professional and advanced content creators who shoot with a Sony Alpha camera, including the new Alpha 7 IV.

Further, both flashes have upgraded continuous shooting flash performance. They are capable of up to 200 consecutive flashes at 10 frames per second for the HVL-F60RM; 60 times for the HVL-F46RM.

In addition, when used with an Alpha camera, they allow users to experience the communication and system benefits of the Alpha Lighting System.

For example, with the Alpha 7 IV, P-TTL flash control metering for every frame in mid- and hi-continuous mode is now possible, along with lo-continuous mode. The flash release time lag was also shortened to capture momentary facial expressions and movements of the subject.

What’s more, when used with the Sony Alpha 1, the HVL-F60RM2 flash achieves 20-fps continuous shooting. In addition, 20 flashes per second are produced for more than 10 seconds with the external flash battery adapter FA-EBA1 (sold separately).

Additionally, when the Alpha 1 is used with Sony’s flashes, users can sync up to 1/400 second shutter speed; as a result, it expands expressive capabilities when shooting in full-frame mode.

Notably, with the silent electronic shutter of the camera, silent flash shooting is possible when absolute silence is required.

Other system benefits of the HVL-F60RM2 and HVL-F46RM with an Alpha camera include the ability for users to control flash parameters directly from the menu of a compatible camera. Flash control is also linked to the camera’s face detection. Automatic correction of white balance is also based on the color temperature information from the flash.