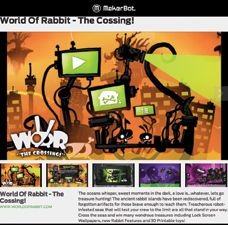 Eight apps are debuting in the portal, including: three design apps—Leopoly, Zotebook and Cookie Caster; three entertainment apps—Modio, World of Rabbit and Robot Factory for MakerBot; a useful app—Fraemes; and an education-themed app—Makers Empire. The MakerBot-Ready apps are accessible via makerbot.com/readyapps.

MakerBot-Ready apps are part of the MakerBot developer program launched earlier this summer, which aims to provide developers with the resources needed to integrate with the MakerBot 3D ecosystem, plus access to the growing 3D printing market. The apps are available for desktop, mobile, tablet and web-based app platforms.

“We are really thrilled to be able to seamlessly incorporate educational, entertaining and useful 3D printing applications into the MakerBot 3D ecosystem,” noted Jenny Lawton, CEO of MakerBot. “In just one site, makerbot.com/readyapps, 3D printing enthusiasts can access third-party apps that make design and 3D printing even easier and more accessible than ever before. It’s our goal to continue expanding the MakerBot developer program and generating even more MakerBot-Ready apps that can join these first ones in the MakerBot-Ready Apps Portal.”

MakerBot-Ready apps in the portal include:

Leopoly. A web-based design app created by Leonar3Do—a multi-award-winning 3D tech company that built its reputation around 3D and virtual reality technologies and solutions—it features modular apps with intuitive tools and starter objects that can be endlessly customized.

Cookie Caster. This design app created by Dreamforge permits users to draw or trace images to create a custom 3D printable cookie cutter as well as choose from a large design gallery.

Fraemes. Also a Dreamforge product, it enables users to design an interchangeable and ready-to-print iPhone case by personalizing unique designs created by artists.

World of Rabbit. Created by Breakdesign, an award-winning mobile development studio, World of Rabbit is an entertainment-themed Windows phone app where players work to save an underground rabbit world from robot infestation.

Robot Factory for MakerBot. This mobile entertainment app created by Thinker Thing allows children as well as adults to create unique and fantastic retro robots ready for 3D printing on a phone or tablet.

Makers Empire. This education-focused mobile design app encourages creativity and innovation in primary school students. Described by its founders as the “world’s easiest to use 3D printing software,” it features themed modules such as a character builder, block builder and doodler, as well as classroom management and lesson plan tools for teachers.

Modio. This award-winning mobile and tablet app was one of the first on the portal and enables makers to design and 3D print fun characters and creatures by using the built-in parts library, along with options for surface textures and shapes.

Additional MakerBot-Ready apps are expected to be added as more developer ideas are integrated into the MakerBot developer program. makerbot.com