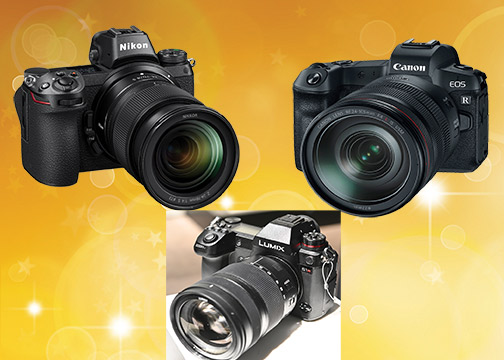 Up until now, Sony has been the dominant force in the full-frame mirrorless segment with its illustrious Alpha 7 series, first brought forth in 2013. They’re still in the lead, however, these momentous introductions may well mark a turning point.

Nikon enters the full-frame mirrorless arena with two attractive FX-format models. Both feature a stylishly slim weather-resistant body built on a robust magnesium alloy chassis. The 24.5MP Z 6 is aimed at a broad spectrum of serious enthusiasts; the 45.7MP Z 7 is focused mainly on pro shooters.

In addition, the Nikon Z 6 offers a hybrid AF system with 273 phase-detection points. It also provides a maximum full-res burst rate of 12 fps and sensitivity settings of ISO 100–5,1200 (expandable from ISO 50 to 204,800). Its top-panel dot-matrix OLED conveniently displays key camera settings when the camera is not at eye level.

Moreover, the EOS R incorporates a 3.7M-dot OLED EVF and a 3.15-inch, 2.1M-dot swiveling, touch-screen LCD. It employs a Dual Pixel CMOS AF system with an amazing 5,655 AF points. A customizable multifunction bar near the viewfinder can be pressed to control ISO, white balance, AF mode, movie modes and other key functions.

In addition, Dual Pixel RAW allows post-capture focus and bokeh adjustments via Canon’s Digital Photo Professional software. The camera also provides built-in Wi-Fi and Bluetooth connectivity, as well as an SD UHS-II card slot. There’s no built-in IS. However, image stabilization is provided via Canon’s extensive range of IS lenses and new RF-mount IS lenses. $2,299 body only; Canon R-mount adapters, $99.99–$399.99.

These two Lumix S full-frame mirrorless cameras from Panasonic were revealed under glass at photokina 2018 in Cologne, Germany, albeit without fully working examples or complete tech specs. Panasonic’s 24MP Lumix S1 and 47MP S1R feature full-frame sensors designed and manufactured by Panasonic themselves.

The cameras also offer dual image stabilization (in-body plus in-lens); large high-res EVFs; and three-way-tilt LCDs to accommodate selfie shooters and vloggers. Unlike many of their competitors, they feature two card slots: one for SD and the other for XQD cards. Both models will capture 4K/60p video, but most video-priority shooters will likely choose the lower-res S1.

The other big news here is that the new Lumix full framers both use Leica Camera’s L mount. It’s not surprising that Leica would share it with their longtime partner Panasonic. Moreover, it’s supported by Sigma, which will most likely be a major source of L-mount lenses going forward. Indeed, speculation continues that Sigma is working on a new L-mount full-frame mirrorless model of its own.

The L mount measures 51.6mm in diameter, which makes it suitable for full-frame and APS-C-format cameras. It has a short flange-to-sensor distance. This makes it much easier for optical designers to come up with compact high-performance lenses. The standardized array of 12 electronic contacts in the L mount allows enhanced communication between electronic components in the lens and body; it also facilitates firmware updates.

Perhaps Panasonic, Leica and Sigma are hoping that the L mount, like the Micro Four Thirds mount before it, will become a standard for the industry in the emerging full-frame mirrorless era.