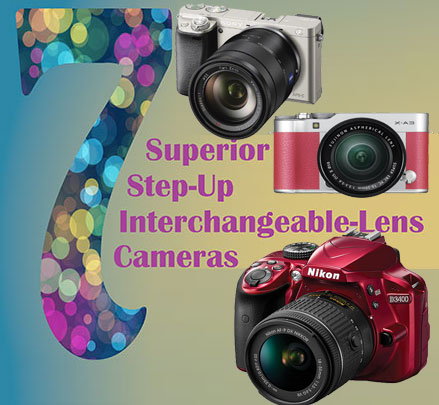 Current digital point-and-shoot and smartphone cameras are certainly capable of capturing impressive images and videos. But they typically have small image sensors and lack the creative options of lens interchangeability. That’s why consumers starting to get serious about creative photography will be tempted by step-up, entry-level, interchangeable-lens cameras (ILC).

Perhaps even more important for dealers, ILCs transform those who acquire them into “system buyers” primed to purchase additional lenses, a wide assortment of accessories and upgraded camera bodies down the line. In other words, ILCs are an important gateway to relationship marketing that provides a golden opportunity to simultaneously serve both your customers and your bottom line.

The seven step-up ILCs detailed here are high-performance, broad-spectrum cameras that offer high value as well as unparalleled access to their respective systems. Also, each provides plenty of room to grow as users become more advanced and proficient.

Please note, however, that we haven’t always chosen the lowest priced model in their respective lines but have favored the latest ones that provide the best performance per dollar quotient. Finally, bear in mind that consumers with the means and motivation should also be presented with the option of stepping up at an even higher level. Certainly show them one of the middle or top-tier ILCs offered by the camera manufacturers on our short list.

This sleekly contoured new DSLR features a 24.2 megapixel (MP) DX-format CMOS sensor coupled to an Expeed 4 image processor. Together they deliver an extended sensitivity range of ISO 100–25,600 and an impressive maximum full-res burst rate of 5 frames per second (fps). And the low-pass filter was eliminated to achieve higher sharpness and greater detail in both photos and videos, including Full HD 1080p video shot at up to 60 fps. Enhanced Wi-Fi connectivity options include SnapBridge, which uses Bluetooth connectivity.

This upgraded, step-up OM-D model provides key features of the flagship Micro Four Thirds OM-D E-M1 Mark II in an elegantly compact, high-value package. It employs a 16.1MP Live MOS sensor that, in combination with a state-of-the-art TruePic VII sensor, delivers crisp full-res images at a blistering 8.5 fps. It also provides ISO settings to 25,600 and has a built-in 5-axis sensor-shift IS system said to deliver a 4-stop anti-shake advantage in handheld shooting.

Like its predecessors, it has the look and feel of a classic rangefinder 35. But it’s an advanced Micro Four Thirds mirrorless camera that features a 16MP Live MOS sensor and a cutting-edge Venus engine. The sensor omits the low-pass filter to boost fine detail resolving power by 10%. It captures 4K UHD video at 30/24 fps and provides a full-res burst rate of 10 fps with single-shot AF and 6 fps with continuous AF.

The GX85 has sensitivity settings to ISO 25,600 and excellent responsiveness thanks to its Depth from Defocus AF technology. In addition, its 3-inch, 1,040K-dot, tilting touch-screen LCD is complemented by a 2,764K-dot EVF to provide excellent viewing options. Other features include: dual IS that leverages the built-in 5-axis IS and the IS capabilities in OS Lumix lenses; Full HD video recording; Wi-Fi/NFC connectivity; silent shutter mode; and auto HDR. Furthermore, a 4K photo function extracts 8MP stills from 4K video. With 12–32mm f/3.5–5.6 Lumix G Vario f/3.5-5.6 stepping motor lens, $799.99. panasonic.com

This svelte step-up X-mount mirrorless compact has a 24.2MP CMOS sensor, provides 100–25,600 ISO settings and delivers 6-fps, full-res bursts. It also offers an electronic shutter option that can execute shutter speeds up to an amazing 1/32,000 sec for freezing extreme action. Additionally, it has a claimed AF speed of only 0.3 sec and a shutter lag time of a mere 0.05 sec.

A 3-inch, 1,040K-dot, tilting touch-screen monitor flips 180º and also uses a slide-and-tilt mechanism to facilitate shooting selfies. It also provides touch AF and touch shoot functions. For easy selfies, there are also a portrait enhancer mode and a self-timer with eye detection, smile detection, buddy timer and group detection modes. Without having to press the command dial or release button, the shutter is released when subjects smile, two people come close together, or a specified number of people come into the frame.