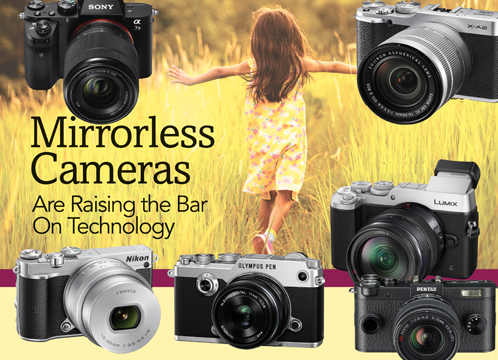 Mirrorless interchangeable-lens cameras are the most vibrant, innovative sector of the camera market. They offer everyone from serious enthusiasts to pros a DSLR-like shooting experience along with significant operational advantages. They also have the greatest upside potential for future development, which is evident in the stunning specs in the models detailed here.

The top models deliver pro-caliber imaging performance in smaller, lighter form factors. And they’re offered at a range of price points commensurate with their feature sets. While traditional DSLRs—which are inherently larger, heavier and more complex—dominate the market in terms of installed user base and unit sales, many experts predict that mirrorless cameras will eventually supplant DSLRs for all but high-end professional users.

This emerging trend is largely based on significant technological advances that are being made in two key mirrorless camera components: the electronic viewfinder (EVF) and the autofocus (AF) system. While current EVFs may still not quite equal the “real feel” view provided by the best optical DSLR viewfinders, the differences won’t be significant to most users. These high-resolution EVFs or OLED EVFs boast incredibly rapid refresh rates and provide a brilliant, high-magnification viewing image. They also have the advantage of allowing users to preview the image captured by the sensor in real time, complete with any exposure corrections and custom settings. This translates to a great advantage when shooting in low light.

Mirrorless cameras also use hybrid AF systems that combine the advantages of fast, decisive on-sensor phase-detection AF and the precision of contrast-detection AF. This has taken the autofocus performance of mirrorless cameras to a level surpassing that of all but pro DSLRs. These AF systems not only provide faster, more accurate AF but also continuous AF and focus tracking before and during the exposure—which is not possible with conventional DSLRs. This is a crucial factor when shooting images at high burst rates or capturing clean 4K and HD video without visible or audible “hunting.”

They also have fewer moving parts and less shutter-release noise and vibration thanks to the elimination of the moving mirror. And they provide a shorter flange back distance that makes it easier to design high-performance wide-angle lenses. The shorter lens-to-sensor distance allows users to mount their existing DSLR lenses and a variety of third-party optics, including legacy rangefinder lenses. As the popularity of mirrorless cameras has steadily increased over the past few years, camera makers and independent lens manufacturers have taken notice and expanded their lens offerings, increasing the creative options available to consumers while providing additional marketing opportunities for dealers.

To keep you up to speed on this important category, here’s a rundown on the latest mirrorless compact cameras.

Sony Alpha a6300. It’s a mirror image of its successful predecessor, the 6000, which continues in the line. But this APS-C-format camera with a 24.2 megapixel CMOS sensor and Bionz X image processor offers a lot more for video shooters. It records UHD 4K (3,840×2,160p) video at 30, 25 and cinematic 24 frames per sec as well as Full HD 1080p video at up to 120 fps for slow motion—all in the XAVC S format. Equally important, recordings using the Super35mm 16:9 aspect ratio recording area are captured at an effective resolution of 20MP (6,000×3,376) and output at 8MP in 4K, with a 2.4x oversampling for greater detail and maximum pixel readout.

Leica SL. For pros, this Type 601 L-mount model delivers cutting-edge specs in Leica’s classic rounded-edge ergonomic form factor. Its 24MP, full-frame CMOS sensor is coupled to Leica’s Maestro II processor to deliver outstanding image quality with a sensitivity range of ISO 50–50,000. To maximize resolution and detail, the sensor foregoes a low-pass filter. And to meet the video needs of pros, it provides DCI 4K (4,096×2160) recording at 24 fps in Super35 mode along with L-Log gamma to maximize dynamic range. It also captures UHD 4K (3,840×2,160) video at 30/25 fps and Full HD video at up to 120 fps. It has a full-res, 11-fps burst rate and a 2GB internal buffer that allows bursts of up to 33 DNG (RAW) files or unlimited JPEGs. Other features include: A 4.4MP, 0.66-inch, 0.8x-magnification EVF; a 2.95-inch, 1.04M-dot touch screen with a 170º field of view; a fast, precise contrast AF system with touch AF; dual SD slots; built-in Wi-Fi; and GPS. Made in Germany, the weather-resistant SL is crafted from two blocks of solid aluminum. $7,499.99. us.leica-camera.com

Pentax Q-S1. The elegantly contoured and leather textured covering of this aluminum-bodied, ultracompact mirrorless model pays homage to the classic rangefinder cameras of the past. But inside it’s thoroughly modern with a 12.4MP, 1/1.7-inch backlit CMOS sensor in the Pentax Q format (with a 4.6x crop factor) coupled to a Q engine processor. The combination delivers 5-fps, full-res bursts, continuous RAW shooting, Full HD 1080p video recording at 30/24 fps, and a 12,800 maximum ISO setting. A rear 3-inch, 460K-dot LCD monitor has a 170º viewing angle and antireflection coating. It also 1 provides built-in shake reduction plus a host of in-camera effects, such as bokeh control, which can be previewed in real time. Other features include: a quick dial for selecting shooting modes; smart effects; AF/MF switching; ND filter on/off; interval mode selection; scene modes; built-in HDR; and multi-exposure mode. The Q-S1 is compatible with optional Eyefi Wi-Fi SD cards for remote transfer. $249.95. ricohimaging.com

Olympus PEN-F. Combining the retro styling of the classic 1960s analog Pen F, this elegant Micro Four Thirds camera has a 20.3MP Live MOS sensor that omits the low-pass filter. The sensor is coupled with an advanced TruePic VII image processor that captures low-noise images and delivers Full HD 1080p video at 30 and 60 fps. It also produces 10-fps, full-res bursts using a mechanical shutter and a sensitivity range that extends to ISO 25,600. Its high-res shot mode combines eight frames into a single 50MP-equivalent image, and its intervalometer function can be used to record time-lapse movies that can be exported in 4K UHD. Other features include: 5-axis sensor-shift image stabilization; 81-zone contrast-detection AF; a creative control dial on the front for adjusting the look of images with a host of creative effects and filters; a 2.36M-dot OLED EVF; an articulated 3-inch, 1.04M-dot touch-screen LCD; and built-in Wi-Fi. With FL-LM3 flash, $1,199.99. olympusamerica.com

Panasonic Lumix DMC-GX8. This brilliantly upgraded Micro Four Thirds camera ups the ante with a higher res sensor and enhanced 4K video options. Delivering a DSLR shooting experience in a slim, elegant body, it incorporates a 20.3MP Live MOS sensor paired with a Venus engine processor. It records 4K UHD video at 30/24 fps, and it captures full-res stills at 10 fps with autofocus. Its unique dual image stabilization system combines in-lens and in-body IS to minimize the effects of shake. For accelerated AF performance, Depth from Defocus technology is used to calculate the distance to subjects in 0.07 sec. Other features include: a 2.36M-dot OLED live viewfinder; a swiveling 3-inch, 1.04M-dot OLED touch-screen monitor; a high-speed, 49-point AF system; sensitivity settings to ISO 25,600; 4K Photo technology that extracts an 8MP photo from 4K video; and built-in Wi-Fi. The GX8’s weatherproof body is constructed from magnesium alloy with die-cast front and rear frames. $999.99. panasonic.com

* All prices are body only unless specified.