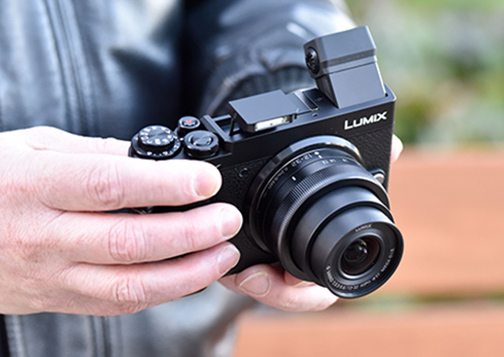 The camera’s L.monochrome D mode was newly added in photo style to make it easier to shoot detailed dynamic monochrome photos with emphasized highlights and shadows. In addition, a grain effect can be adjusted in all monochrome modes via photo style.

The mirrorless model also employs a 5-axis dual IS (image stabilizer) to suppress blur. The system combines an OIS (optical image stabilizer, 2-axis) and a BIS (body image stabilizer, 5-axis). As are result, the dual IS system compensates for a wider range of movement to help enable blur-free photo and video shooting from wide to tele, even in low light.

In addition, the camera boasts a new wide-screen LVF (live viewfinder) that tilts up approx. 90º. With its 2.76M-dot-equivalent resolution and 100% color reproduction, this 16:9 LVF provides approx. 1.39x magnification and 100% field of view. Complementing it is a 3-inch, 1.24M-dot static-type touch monitor that also provides nearly 100% of field of view. Furthermore, the LCD tilts up 80º and down 45º to enable shooting at high or low angles.

The Lumix GX9 also incorporates a contrast AF system with DFD (Depth from Defocus) technology, developed to excel in both speed and accuracy. The system exchanges digital signals between the camera and the lens at a maximum of 240 frames per second for 0.07-second autofocusing.

Moreover, it provides a range of AF functions. They include face/eye-detection AF, pinpoint AF, one-shot AF and advanced low-light AF. And a live view boost function was added to make it possible to check composition even in total darkness by boosting sensitivity just for live view.

The GX9 records 4K video in 3,840×2,160 at 30p or 24p in the MP4 format. In addition, its 4K photo mode is now easier to use. This is result of working with creative functions like auto marking and sequence composition. These two additions join the post-focus, focus-stacking, light composition and 4K live cropping functions.

The GX9 also records Full HD 1,920×1,080 60p video with full-time AF. This technology also enables photographers to use the Lumix 4K photo mode to capture moments by extracting single frames from 4K burst files shot at 30 fps and save them as 8MP equivalent photos.

Panasonic also announced that “choosing the best shots out of hundreds of 4K video frames is now easier. This is due to a newly added auto marking function.”

Auto marking identifies the frame most different from the others to minimize the time it takes to choose the best shot. In addition, the sequence composition function creates a stro-motion image in-camera. It synthesizes multiple images shot at a fixed frame to produce a unique image of a subject’s motion without special retouching.

The GX9 also adopts post focus, wherein it selects an in-focus area even after shooting. Post focus is helpful in situations such as macro shooting where strict focusing is required. Or when changing expressions by changing the focused subject. In addition, a focus-stacking function adjusts depth of field after shooting. It combines multiple images shot with post focus in-camera. As a result, shooters don’t need to focus strictly while shooting because they can create images with the defocus level they want or pan-focus by selecting the focus area after shooting.

Another new feature is the composition function in the 4K photo option. The camera synthesizes images by choosing and saving a brighter pixel to produce more dramatic images of fireworks or night scenery in-camera. The GX9 also enables 4K live cropping in video recording to realize stable panning or zooming. In panning shots, users just set the viewing angle to begin and end with for smooth panning imagery without using special equipment, such as a slider. And in zooming, they can set the after-zoomed viewing angle first, to ensure the subject is in the frame.

Finally, there is Wi-Fi, and Bluetooth 4.2 connectivity enables a consistent connection with a smartphone/tablet with minimum power consumption.

Panasonic’s Lumix DC-GX9 will be available in stores in March 2018. It will be offered in two colors, black and silver, with a suggested retail price of $999.99. panasonic.com