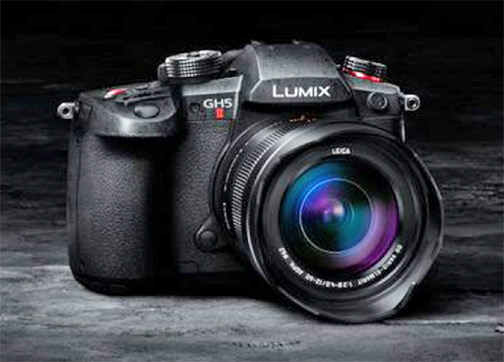 Newark, NJ—Along with the announcement that the flagship Panasonic Lumix GH6 with a new Micro Four Thirds sensor and image processor will launch by the end of 2021, the company unveiled the Panasonic Lumix GH5M2.

The Lumix GH5M2, an evolution of the GH5 hybrid mirrorless ILC, features a 20.3-megapixel Digital Live MOS sensor. In addition, the sensor’s antireflective (AR) coating helps to drive the maximum performance of the attached lens. Its image processor was also updated by adopting the latest Venus Engine to boost speed and performance.

Furthermore, with V-Log L preinstalled on the GH5M2, filmmakers can more easily match the color tone with the footage recorded in the V-Log of S1H/S1 and V-Log L of GH5/GH5S cameras.

The preinstalled V-Log L delivers a high dynamic range as well as broad colors; thus, it eliminates the need to purchase a Software Upgrade Key. V-Log L renders a flat image while maintaining the image’s range of color information. Subsequently, there is a greater level of play when images are put through postproduction. What’s more, V-Log L has log curve characteristics similar to negative film.

The GH5M2 can also record unlimited video in various settings. Additionally, because it realizes a crop factor of 1.0x in 4K 60p by using the whole sensor area, filmmakers can record in the lens’s original viewing angle. 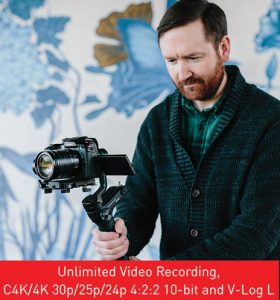 The company also announced that users can download 35 free conversion LUTs for VariCam cinema cameras to use in the GH5M2. Practical tools like a waveform monitor and V-Log L view assist are also available.

The 20.3MP Digital Live MOS sensor captures all the details delivered through the attached lens. The sensor’s AR coating minimizes ghosts and flaring, even in backlighting.

“The Lumix GH5M2 features high-speed and high-precision AF, as well as incorporates an advanced deep learning technology that detects specific subjects such as humans and animals,” Panasonic noted. In addition to detecting the eye, face and body of a human subject, the head is also separately recognized by real-time detection technology for more precise focusing.

In fact, the new ILC detects eyes and faces at a 2x faster recognition cycle speed than the GH5. In addition, they are detected even if they appear in half the size of those the GH5 captures. The camera also keeps tracking human subjects even if they move quickly, turn their backs to the camera, tilt their heads or move far away from the camera.

Panasonic also improved the DFD technology with enhanced AFC. As a result, users can keep tracking small or fast-moving subjects for crisp focus when the shutter is released.

Moreover, the GH5M2’s body image stabilizer (IS) was upgraded to achieve stable handheld shooting with a 6.5-stop slower shutter speed. The GH5M2 also adopts the latest algorithm developed for the S1H to produce smoother video, even while in motion or in panning. Notably, movement with a characteristically low frequency is suppressed more effectively to use slower shutter speed.

What’s more, the ILC employs a 3-inch free-angle LCD in 3:2 aspect with 1.84M-dot resolution and touch control. It features higher luminosity than that of the GH5 and superior color reproduction for higher visibility outdoors.

In addition, users can check composition while recording in various popular aspect ratios (16:9, 4:3, 1:1, 4:5, 5:4, 9:16) with the ILC’s frame marker function. And the red frame indicator identifies whether the camera is recording or not.

In addition to wired livestreaming, the Lumix GH5M2 is capable of wireless livestreaming using the Lumix Sync app for smartphones. Furthermore, only the camera and a smartphone are required for livestreaming in either an outdoor or indoor environment. Complying with H.264 in RTMP/RTMPS protocol, maximum FHD/60p 16Mbps is also supported. 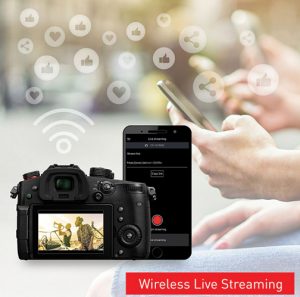 Features for the Pros

Built to withstand heavy field use, the GH5M2 is composed of a magnesium alloy full die-cast front/rear frame. It is splash and dust resistant as well as freeze resistant down to 14ºF. Its shutter unit is also rated for 200,000 cycles.

In addition, for outdoor use, the ILC’s new battery boasts 2200mAh high capacity. Users may charge the battery via AC or USB. It also complies with USB PD (power delivery).

The GH5M2 integrates Bluetooth as well as Wi-Fi connectivity. Users can shoot, browse and share images remotely once they connect the camera to a smartphone/tablet installed with Panasonic’s dedicated app, Lumix Sync. Compatibility with Bluetooth 4.2 (Bluetooth Low Energy) also enables a constant connection with a smart device with minimum power consumption.

Panasonic also incorporated 5GHz (IEEE802.11ac) Wi-Fi as an addition to the conventional 2.4GHz (IEEE802.11b/g/n. Consequently, the ILC can establish a more secure, stable connection not only with a smartphone/tablet but also with other devices on location for remote control. Of course, using the 5GHz band also increases the transmission speed of photo and video data.

The GH5M2 can also use the DMW-XLR1 microphone adapter as a plug-in adapter for an XLR microphone to record high-quality stereo sound. It enables 4K video recording with 96kHz/24bit sound. Dedicated switches also allow direct control, while mic, line and condenser are switchable.

Further, use of the DMW-RS2 shutter remote control minimizes unwanted motion; this makes it easier to shoot bursts or hold the shutter open for extended periods of time. It also has a start/stop button for videography.

The GH5M2 is also compatible with the DMW-BGGH5 battery grip. For longer shoots, users can extend battery life by using two batteries, one in the camera and the other in the grip. It also makes handling more comfortable even in vertical angle shooting, and it has a joystick.

Moreover, videographers can use the DMW-SHGR1 tripod grip for recording selfie videos while walking, etc. It also works as a compact tripod for tabletop shots. And connecting with the camera via USB, it’s possible to start/stop video recording; release the shutter; as well as enable/disable sleep mode.

In addition, via Lumix Tether PC software, users can control the camera by connecting it to a PC via USB. When continuous confirmation is required, photographers can view the image on a large PC screen while shooting. They can also start and stop video recording with the tethered shooting.