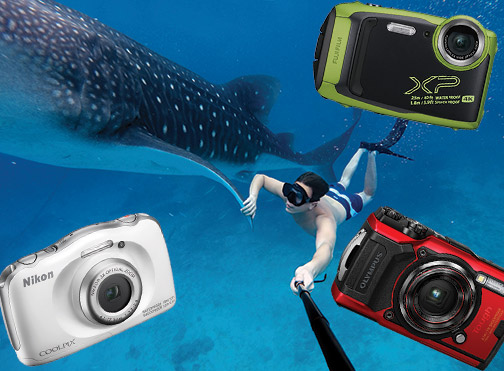 To say the entire imaging field continues to go through a tumultuous transition is an understatement. Nevertheless, active lifestyle cameras have maintained their position as a successful market segment. That’s because these rugged point & shoot cameras offer what many consumers want. They provide a fetching combination of high style, high performance and a robust, waterproof, impact-resistant, go-anywhere body build.

They are the broadest of broad-spectrum digital compacts. In fact, they are perfect for skiing, surfing, taking to the beach, on the boat, on a hike, in the woods, or any place one might think twice about taking an unprotected DSLR or mirrorless camera—or even a smartphone.

These audaciously attractive cameras deliver a satisfying blend of high-end performance and shooting flexibility. That makes them a high-value proposition for consumers who want to go anywhere, in any weather, and bring back memorable images and videos. Need we say that the cameras covered here are superb choices for dealers and consumers alike, now that the outdoor picture-taking season is in full swing.

Moreover, the TG-6 is waterproof to 50 feet, dustproof, shockproof to 7 feet, crushproof to 220 lbf and freezeproof to 14ºF. And it features nitrogen-filled sealed dual-pane protective glass construction for antifogging performance. It has an upgraded 3-inch, 1.04M-dot LCD monitor. And now five underwater modes include underwater macro and HDR, along with three underwater WB modes.

Notable are image stabilization (IS), built-in Wi-Fi and GPS, plus eCompass and manometer functions. Its Field Sensor system also includes a temperature sensor and on-screen data displays that overlay onto photos/video. Another special feature is microscope control mode with three magnifications. In red or black, $449.99.

This tough Panasonic entry features minimalist styling, an electronic live viewfinder (EVF) and a full feature set. It is waterproof to an impressive 102 feet, withstands a 6.6-foot drop, is freezeproof to 14°F and is crushproof to 220 lbf. It also boasts an integrated compass and altimeter. Plus, a built-in LED light helps when shooting in dusky underwater or nighttime environments.

Outdoor photographers will also enjoy 4K photo mode to pick perfect moments from individual video frames recorded at 30 fps and saved as 8MP pictures. Other key specs include: a 1.17M-dot EVF; a 3-inch, 1.04M-dot LCD; Wi-Fi and geotagging support; and a post focus mode that lets users select the focus point after an image is captured. In blue, black or orange, $449.99.

It also employs a 3-inch, 921K-dot LCD monitor with six brightness levels and hybrid (optical plus electronic) vibration reduction to combat the effects of camera shake. SnapBridge with built-in Wi-Fi and Bluetooth connectivity enable sharing and remote control via a smartphone or tablet, plus GPS for geotagging.

Other niceties include 4K UHD video recording at 30 fps; a maximum burst rate of 7 fps for stills; and sensitivity settings from ISO 100–6,400. Creative modes feature smart portrait and glamour retouch, plus a variety of special effects. Moreover, there’s a built-in LED light that can be used as a flashlight or to illuminate close-up subjects. In black, yellow or orange, $389.95.

This Spartan, underwater camera from SeaLifes aimed at serious scuba divers who want to shoot underwater at great depths. When ensconced in its included underwater housing, it’ll work down to a remarkable 200 feet, and without it, down to 60 feet.

The camera captures Full HD 1080p video at up to 60 fps and full-res bursts at up to 10 fps. It provides picture-in-video mode, as well as program, shutter priority, aperture priority and manual exposure modes.

This ruggedly styled Olympus action camera is waterproof to a depth of 100 feet, withstands a 7-foot drop, is freezeproof to 14ºF and crushproof to 220 lbf. Its fast, water-repellent, ultrawide-angle 13.9mm f/2 lens covers a 204º angle of view. Moreover, an integral LED headlight above the lens lets users shoot underwater or in dark environments.

Plus, when users switch to log mode, they can record data from the camera’s GPS, compass, accelerometer, thermometer and barometer, and view them on the monitor or download them for later use. Other features include: 0.5–60-sec interval capture for time-lapse photography; 5-axis electronic IS for stills and video; and support for microSD and SDHC/SDXC cards. In green, $349.99.

It also features construction upgrades. It’s now waterproof to 82 feet, shockproof to handle a 5.9-foot drop, freezeproof to 14ºF and dustproof. Redesigned for ease of use during outdoor activities, it has a grip and a double-locking mechanism for the battery compartment. It also employs Fujifilm’s color reproduction technology and a Fujinon 5x optical zoom, 28–140mm lens. The optical zoom range reaches 10x with Intelligent Digital Zoom technology, and it has an optical image stabilization mechanism.

The XP140 also features an evolved scene recognition auto mode, eye detection, auto-intelligent functions, 17 filter effects and self-timer mode, which automatically releases the shutter when detecting a smiling face. Bluetooth allows automatic, instant transfer to smartphones/tablets, as well as syncs the time and location from the smart device and attaches it to images, plus enables remote shooting via the Fujifilm Camera Remote app. In yellow or blue, $229.95.

Sony’s upgraded RX0 II premium compact measures 2-3/8×1-5/8 inches and weighs 4.1 ounces. The diminutive P&S builds on the everything-proof and ultracompact qualities of the original RX0. The pocketable camera is waterproof to 33 feet, dustproof, shockproof to withstand 6.5-foot drops and crushproof to 440 lbf.

It also offers internal 4K recording at 30 fps with full pixel readout and no pixel binning; an LCD screen that tilts up 180º and down 90º; and in-body electronic IS for video recording. A 1.0-type stacked 15.3MP Exmor RS CMOS sensor and Bionz X processor provide enhanced color reproduction and skin tones, as well as an ISO 80–12,800 sensitivity range. A Zeiss Tessar T* 24mm f/4.0 fixed lens has a 7.9-inch minimum focusing distance for selfies or tabletop photos.

Nikon’s perky, outdoor compact is tougher than it looks. It boasts a rugged body that’s waterproof to a depth of 33 feet, freezeproof down to 14ºF and is capable of handling a 6-foot drop.

The Coolpix W100 employs a 1/3.1-inch 13.2MP CMOS image sensor as well as a Nikkor 30–90mm f/3.3–5.9, 3x optical zoom lens. In addition, the zoom can be extended to 6x with Nikon’s built-in Dynamic Fine Zoom technology. And the W100 provides a contrast-detect AF system with an electronic VR (vibration reduction) IS system.

Other features include: a 2.7-inch, 230K-dot LCD monitor; Full HD 1080p video capture at 30 fps with stereo sound; a built-in flash; and Nikon’s always-connected SnapBridge with full Wi-Fi connectivity, NFC as well as Bluetooth. It even offers a friendly welcome screen, cartoon and neon effects, and glamour retouch effects. In blue or white, $159.95.

*All focal lengths are in 35mm equivalents, unless otherwise specified.