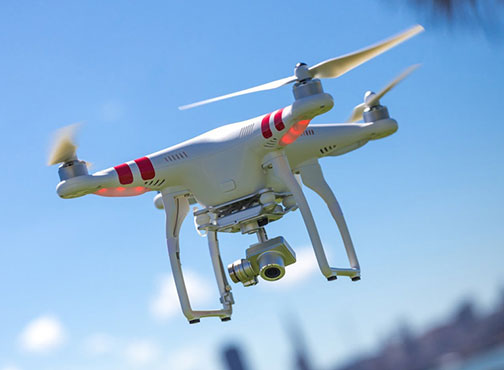 Consumer drones gained slightly in popularity in 2016, and aerial photography and videography are a key reason why. Equipped with a high-definition (HD) or higher resolution camera on board, a drone affords pilots the ability to set up shots from vantage points that would otherwise be difficult, expensive or all but impossible. Capturing those images with better and more versatile optics is where this growing category is likely headed.

Most drones used for aerial imaging are quadcopters or hexacopters. That’s partly because they offer greater control over altitude, speed, pitch and orientation. The cameras generally use decent image sensors with wide-angle lenses attached to three-axis gimbals that provide some flexibility in shooting straight ahead or directly below.

Gimbals are critical to ensuring stable images along the three axes of rotation—pitch, roll and yaw—that quadcopter or hexacopter drones tend to fly. That’s not to say they can’t support more. But that is the most common in consumer and prosumer drones thus far.

Some drones have the camera built into the body. This is the case with drones made by Parrot and certain models from other vendors. These would include the Yuneec Breeze 4K and DJI Mavic Pro, for example. The Parrot Disco is a fixed-wing drone that flies a lot like a plane, having to always move forward in one direction or another. It helps shoot smoother video of a landscape that looks more dramatic because of the turn radius. However, the constant motion means there’s no way to shoot while hovering or panning sideways.

Attaching a camera under a fixed-wing drone is challenging because there is no landing gear. The wider wingspan also obstructs peripheral views when mounting on top of the body. The Disco is Parrot’s first foray into the consumer space with a fixed-wing model. However, in the last few years, the company has made them for commercial purposes, like surveying crops or land.

In most cases, these cameras won’t match the quality of a dependable point-and-shoot, DSLR or even certain action cameras, like the GoPro Hero5. Professional or serious amateurs looking to bridge the two together may find options aren’t as abundant as they’d like.

GDU Technology (formerly ProDrone) is one vendor that has pursued the ability to mount different cameras, particularly on its Byrd Advanced drone. The Advanced is a foldable quadcopter that offered greater portability when it launched early in 2016. While the Bryd Premium version has its own 4K camera, the Advanced model was marketed more for its ability to mount a GoPro and other third-party cameras.

Last spring, the DSLR mount was integrated with different Sony cameras. These include the a7R II and a6000 ILCs and Cyber-shot DSC-RX100 IV, along with the Ricoh GR II, Panasonic DMC-GH4, Blackmagic Micro, Cinema Camera BMD and Canon 5D Mark III.

A limitation in this setup lies in the landing gear. It doesn’t elevate to allow the gimbal to turn 360º for an unobstructed view in any direction. As a result, the drone’s forward orientation must be shifted to line up a shot.

Attaching GoPro cameras to drones has been enthusiasts’ do-it-yourself activity for the last few years now, making it a fairly common theme. The 3D Robotics Solo is an example of a drone made to accommodate the GoPro because it doesn’t have its own camera. Different weight distributions help manage the varying heft of each GoPro model, going back to the Hero3+ Black.

A GoPro, however, is far lighter than the typical Micro Four Thirds (MFT) mirrorless or DSLR camera. Given most drones have a constrained ability to carry heavier payloads, physical compatibility is critical. GoPro launched its own drone called the Karma, only to then recall them because of a performance issue causing it to lose power.

DJI attempted to provide some customization with the Osmo, which is standard 4K on the base level. But it hits another plateau with the X5 and X5R MFT sensor upgrades (Pro and RAW) when attached to the company’s Inspire 1 drone. This is essentially the same camera DJI used in the Zenmuse X5R, and its versatility in working separately with its own handle or various mounts makes it a compelling choice for digital imaging use cases.

The DJI Spreading Wings S900 may offer more creativity in that it is a hexacopter with retractable landing gear and a maximum takeoff weight of 18 pounds. And that is more than enough for cameras ranging from action cams to DSLRs. Its mounting system is the Zenmuse Z15, albeit with slight variants DJI has built to fit different camera sizes and weights. Flight time is already short at a max of 18 minutes, and it’s not clear if that number is reduced because of additional load from a heavier camera.

Other manufacturers have also taken steps to make their drones compatible with higher end, interchangeable-lens cameras. Yuneec, for example, offers the Tornado H920, a hexacopter that is compatible with the Panasonic Lumix DMC-GH4 pro-level mirrorless model. The Tornado’s land gear also retracts to allow the camera to capture a 360º view of the world below.

Assessing whether a drone can or cannot handle another camera really comes down to how much it can actually lift. The combined weight of the camera and the mount has to be taken into account, or else the drone may not take off at all.

Additionally, controlling the camera while in mid flight may not always be possible. Some drones have controllers that can interface with a third party, especially the GoPro, whereas others don’t. In other words, you might be able to see what the camera is shooting but not be able to control composition, focus or pan to change the perspective.

Software compatibility may also be an issue, because that’s what truly drives the connection between the drone and controller. While it is technically possible to use a dedicated app to control a camera or get a live view of the action, the Wi-Fi Direct connection bridging them may have limited range. For example, if a Nikon, Canon or Sony camera were connected directly to an app on an iPhone or iPad, it would be possible to see what you’re shooting from a relatively short distance, while controlling the drone’s flight with a controller.

However, in some instances, you may need two mobile devices. That’s because the controller may require its own connection to the drone’s dedicated app. All of this can complicate deployment, but it is possible for users to pull off, regardless of experience.

Drone manufacturers do make it a point to explain what third-party cameras they officially support. However, finding out if there are others requires some homework. Plenty of examples of unusual or mixed setups are on YouTube alone.

The parallel growth of both 360º cameras and virtual reality (VR) hardware as well as software presents intriguing possibilities on shooting with multiple perspectives in mind. Good choices are still fairly limited in this space, but they are off to a good start.

The Ricoh Theta S is lightweight and portable, but its upright form factor makes placement challenging. The Samsung Gear 360 is very good, yet it only works with select Samsung smartphones. The 360fly 4K is well suited to drone usage because it is waterproof and more ruggedly designed than others. It also only has one spherical lens instead of two.

Nikon’s KeyMission 360 is the latest entry into the mix. It brings an established camera brand into the fray that has outfitted it with a waterproof, shockproof and freezeproof body. The only caveat to shooting spherically with any 360º camera is the field of view. If unhindered by landing gear, it can present some interesting shooting scenarios.

Users can shoot with only one lens for a wide-angle view with any of those cameras, so spherical images aren’t the only methodology afforded while flying. Manual controls for shutter, ISO, exposure and white balance are fairly limited, but at least they’re available.

There are a number of vendors selling parts to build drones with the bracketing and holders necessary for a wider range of cameras than drone makers are able to offer. Building a rig from veritable scratch requires research and patience. And that is because the mechanics of the drone factor in as much as any camera mount would.

The obvious advantage here is that just about any camera can likely be equipped for such a purpose. Tinkering with existing drones is always a possibility. However, it may void the warranty if there isn’t native support for whatever is being added.

Forums and user groups are easy to find online discussing the details and merits of these custom builds, like what drone fits best with what camera, and so on. If a user feels mechanically inclined, there are countless variables in forging something viable and effective.

It should be noted that the Federal Aviation Administration (FAA) implemented regulations on flying drones effective August 29, 2016. The FAA breaks them down into three distinct categories. Commercial is any use deriving profit; wedding photographers, videographers and deliveries would fall under that.

Recreational is any use that is purely for enjoying piloting without any money changing hands. Public and governmental is aimed at law enforcement and government agencies using drones for various purposes.

Certain states have also implemented different laws on drone flights, though most have currently not passed legislation. Either way, the federal laws do apply. Drones should be registered with the FAA, all of this is explained in this FAQ: www.faa.gov/uas/faqs.