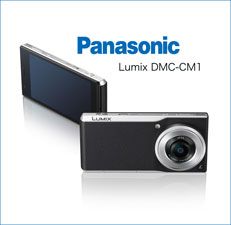 Newark, NJ—Following a successful initial launch of the Panasonic Lumix DMC-CM1—a 1-inch sensor camera with an Android operating system and unlocked GSM smartphone functionality—the company announced it will now be available in the U.S.

With a slim profile that allows it to fit into a pocket, the DMC-CM1 boasts a 1-inch, high-sensitivity, 20 megapixel MOS sensor and a Leica DC lens. The combination is designed to produce highly detailed images, accurately rendered soft focus and low-light performance with minimum noise levels—even at high ISO. The camera will ship with Android 4.4 KitKat, which can be upgraded to the latest Android 5.0 Lollipop operating system.

For operability similar to that of an interchangeable-lens camera, photographers can use the ring on the lens barrel to control aperture, shutter speed, ISO and the selection of a creative control filter. Precision focusing is available with MF assist or a focus-peaking function while viewing the live image on a large 4.7-inch, 6220K-dot rear monitor.

In addition to RAW still image capture, the DMC-CM1 is capable of recording 1,920×1,080 Full HD video (30p) and 3,840×2,160 4K video (15p), which is four times the resolution of Full HD. To take advantage of its 4K recording capability, the camera offers two special applications—4K pre-burst and 4K photo. 4K pre-burst lets users capture a fleeting photo opportunity, such as fast-moving children, by automatically recording approximately 45 frames right before and after the shutter release. Users can then choose the best picture to save. The 4K photo function enables cropping an 8 megapixel still picture out of the recorded 4K video.