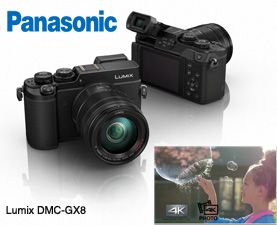 Body IS and Lens IS work at the same time to take maximum advantage of both stabilizers, not only for wide-angle but also with telephoto shots. To suppress almost any type of vibration, the image stabilization system employs a maximum 3.5x (wide)/1.5x (tele) wider correction angle—to help deliver clear handheld shots even in low light.

Its 20.3 megapixel Digital Live MOS sensor is said to excel in response, sensitivity and dynamic range, while a Venus engine processor boosts performance with a quad-core CPU that handles high-speed signal processing. Integrating noise reduction systems, the GX8 enables shooting at sensitivities as high as ISO 25,600. And, the camera is capable of burst shooting at 8 frames per sec (AFS) or 6 fps (AFC).

For framing, there’s a large, 2,360K-dot, tiltable live viewfinder that boasts a magnification ratio of 0.77x (35mm equivalent) and a 100% field of view. OLED (organic light-emitting diode) displays are adopted for both the LVF and the free-angle, 3-inch, 1,040K-dot rear monitor. Specs state the OLEDs achieve high-speed response with a time lag of less than 0.01 sec as well as 10,000:1 high contrast.

Additional features include: in-camera RAW processing; creative control in PASM mode; 22 filter options; panorama shot mode; Wi-Fi with NFC (Near Field Communication) connectively, to connect the camera to a smartphone/tablet for storing and sharing; a magnesium alloy die-cast frame; and a sleek exterior with a grip and finely machined dials.

Panasonic’s Lumix DMC-GX8 is available in two versions: all black and silver top with a black bottom. It has a suggested retail price of $1,199.99 body only. panasonic.com