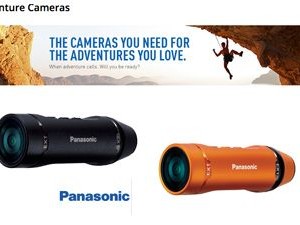 A key feature is the A1’s ability to shoot in total darkness. Using an optional infrared (IR) light source and the included IR filter in 0 lux night mode, users can capture video in caves with no light or nocturnal wildlife at night, for example.

Designed for use in harsh environments, the A1 sports a cylindrical body that can be attached in numerous positions to suit a variety of shooting opportunities. The action cam is waterproof to depths of 5 feet without a housing case (IPX8 compliant), shockproof enough to survive a drop of up to 5 feet, freezeproof to 14º F and dustproof.

Due to its built-in Wi-Fi connectivity, users can capture video after verifying the angles on a smartphone or tablet via the Panasonic Image app. Images can also be uploaded and shared to social media sites. Plus, the action cam can be used as a computer webcam when connected via USB.

In addition, while recording footage on the A1, users can send video to a sub-window on the Panasonic W970 or W870 camcorders via Wi-Fi. This will be combined with the main picture shot by the camcorder, allowing users to merge two simultaneously recorded videos into one. With this feature, videographers can combine multiple subjects into one video or combine the same subject viewed from different angles.

The A1 also provides loop recording, which retains the most recent hour of scenes by erasing earlier scenes. The camera keeps recording seamlessly, by managing video in two-minute segments. For slow motion video, it records 1,280×720 pixels at 60 frames per sec, double the normal frame rate; and at 848×480 pixels it records at 120 fps (4x speed).

Panasonic provides accessories for the A1, including a multi-mount that attaches to goggles, shoulder bags or helmets, and a tripod mount that secures it to a tripod.

Additional optional accessories include: a twin mount that attaches the A1 and a light source for shooting in the dark; an extended battery for 2 hours and 45 minutes of continuous recording; a strap adapter that attaches the camera to a strap or carabiner; a head mount; a clip mount; a suction cup mount for flat surfaces; a handlebar mount; and a wind jammer that reduces wind noise on the microphone.