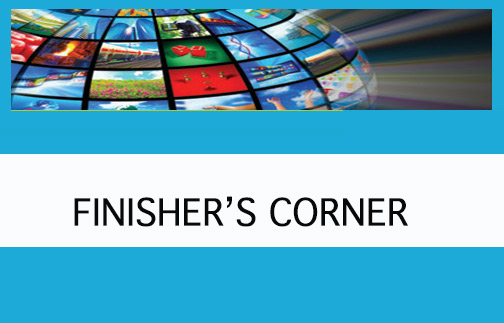 During a market briefing session at photokina concerning photo output, Frank Franz, the director of Global Marketing and Sales, Photo Markets, at GfK, an international market research firm, noted that global sales of image capture devices are rising, as shown in Figure 1.

Overall digital still camera (DSC) sales continue to fall. Fixed-lens model sales are projected to drop 33% in 2014. DSLR model sales are projected to decline 12% in 2014. However, mirrorless compact system camera sales are growing slightly. This is not surprising if we look at new model launches since 2010. They indicate that more CSCs are being launched than DSLRs (47 vs. 23 in 2013 and expected to be 41 vs. 21 in 2014). And a “new” category of cameras—action cameras—is emerging as a source of images. More than six million units are expected to be sold worldwide in 2015 (see Figure 1). 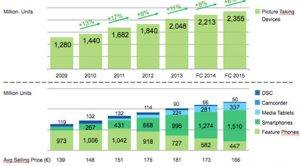 Since print service providers, including photo retailers, make their money from photo output, this research shows they need to focus on getting printing business from the other image capture devices. We know SLRs are capable of creating excellent videos. But are we capitalizing on the ability to make still prints from videos captured by these devices? Let’s look at the images captured worldwide from various image capture devices.

Photo Imaging News expects that, from 2013 to 2016, those taken on professional films will decline at a 18.1% CAGR. In addition, those from consumer films will fall at a 7.4% CAGR. Surprisingly, we expect the number of images captured and saved on consumer DSCs to also decline by a 2.3% CAGR. However, those saved from non-consumer DSCs will rise at a 1.4% CAGR. But a growth of 9.7% CAGR in cameraphone images saved (17.9% CAGR for the 2010–2016 period) will produce an overall 4.5% CAGR growth in the total images saved. Images captured with tablets have not been included yet in this analysis.

Figure 2 represents the number of worldwide individual prints and does not include photo output such as canvas prints, which are becoming more popular. It also doesn’t include prints in photo books, which are growing and cannibalizing individual prints. As automatic image correction is increasingly used, more acceptable prints are being made. This is especially from underexposed cameraphone images. 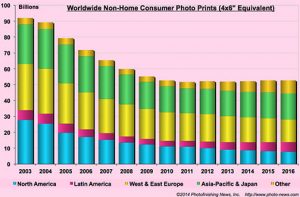 Most photo kiosks in developed countries can now be easily connected to cameraphones/smartphones. As a result, 5.66 billion prints were made from these devices in 2013, up only slightly from the 5.55 billion in 2012 due to the economy, wars and weather changes in the world. However, 2014 growth seems to be better, and for the next two years we forecast growth to 6.27 billion in 2016. In the meantime, prints from DSCs are starting to decline as higher quality image capture modules are being integrated into cameraphones and theses devices are capable of taking excellent photos.

Many of the prints that were formerly made individually are now appearing in photo books. If we consider these “cannibalized” prints, we see that overall printing has bottomed out on a worldwide basis. Should we include multi-image prints, posters, canvas prints, metallic and other types of prints, these numbers would be rising again.

As print service providers begin expanding their concepts of “prints” to include textured, glass, metallic and other substrates, especially those prepared as “art” rather than purely as a photographic representation of the original image, the number of individual prints is expected to again begin increasing.

Photos can now be used to personalize an extensive range of products. As consumer awareness increases, this market is exploding, and competition is trimming prices. For retailers who are willing to make the change, the revenue growth in personalized photo products is staggering. Growth from 2007 through 2016 is predicted to be almost 24% CAGR, as illustrated in Figure 3. If we were to include the extensive portfolio of the different personalized photo products now being made around the world, the growth would be even greater. 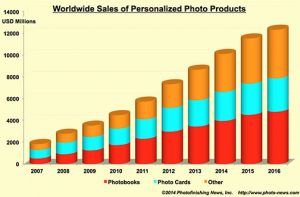 Not too long ago, pro photographers were limited in what they could offer in their wedding packages. Today, with digital print service providers, photography packages are only limited by their imagination and budget of the bridal couple. Wedding products that were purchased from other non-photographer suppliers can now be included in the photo package that is printed with a mixture of technologies. These products may include invitations, place cards, fans, banners, etc.

The same can be said for photo books. Once, photos had to be put into an album. Photo books have integral prints and can include text, audio and video links to tell a story. As consumers become more aware of these products, their popularity increases. Photo books have grown rapidly in North America and surprisingly slowly in Japan.

Photo Imaging News articles reviewing the Dscoop Asia conference, about the opportunities in self-publishing, and one on yearbooks, reinforces our belief that, when photo books are defined as any combination of photos and text (and in digital versions may include voice, music, video and other multimedia products), the expansion of this category is phenomenal.

In the USA, three groups—Innovations in Photo Imaging, the Consumer Electronics Association and the PhotoImaging Manufacturers and Distributors Association (PMDA)—invested almost two years to develop a campaign to educate consumers about the benefits of using higher performance cameras and also the emotional excitement of photo output products. The goal is to achieve an industry-wide promotion, and retailers are urged to participate. The messages and graphics available at no charge. The program was designed to enable retailers to add their own information. A PowerPoint presentation of this campaign may be viewed on the Photo Imaging News website, http://photo-news.com/?p=329.

The campaign theme for moms is “Life Is Crazy: Hold on to the Highlights.”

This theme taps moms’ feeling that life is racing by. The campaign reminds them to stop, enjoy, capture and hold on to the wonderful (crazy) moments of their lives (their children’s lives). Use this theme with visuals to inspire moms to think, “I want photos like THAT of my child! I’ve got to get this done! How?!”

A digital toolkit is included in the PowerPoint. It provides messages and images to educate retail sales associates and to add into your consumer education materials. In addition to key messages, the kit contains files for a poster, web ads, web images that can be dropped into content sites, and some limited content to educate gen X and gen Y moms about what features they need to take better photos and to preserve their memories with meaningful printed products.

While the number of prints being made worldwide has started to rise, we must continue to educate and inform consumers on the vast array of personalized photo output products available to them—and on the need to preserve their precious memories with tangible products.