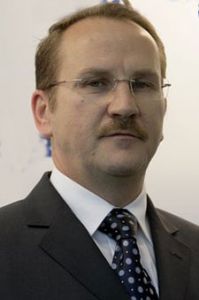 London, UK—Steven Ross, interim chairman of the board of Kodak Alaris, announced that Ralf Gerbershagen was named chief executive officer of Kodak Alaris Holdings Limited, effective April 1, 2014. Gerbershagen, who will be based in the UK at Hemel Hempstead, will report to Ross to complete the new company structure and lead the ongoing transformation of the Kodak Alaris business worldwide.

Kodak Alaris was formed on September 3, 2013, when the U.K. Kodak Pension Plan (KPP) completed its acquisition of the Kodak Document Imaging and Personalized Imaging businesses from Eastman Kodak. The new company, which is licensed to use the Kodak brand, will focus on strategic, ongoing investments for these businesses to ensure long-term growth and success.

“Ralf is a recognized leader in both established and growth businesses, and brings an unparalleled commitment to innovation, change and customer needs in the dynamic mobile industry,” said Ross. “I am thrilled that he will join us as CEO and lead the already considerable success established by Kodak Alaris since its formation in September 2013. With Ralf’s leadership and experience in creating new businesses in the enterprise world, combined with our strong resources and management talent, we are well poised to lead the development of breakthrough products and services that our customers expect from the diverse Kodak Alaris businesses.”

Gerbershagen joins Kodak Alaris from Motorola Mobility, currently part of Google, where he held several leadership positions, including managing director Motorola Germany GmbH and vice president/general manager of Motorola Mobility Europe, where he had responsibility for the business of several product portfolios, such as network infrastructure equipment, smartphones and accessories.

He began his professional career at Siemens, where he was in charge of the Passive Components business in Europe, Latin America and Asia. Gerbershagen is also on the board of directors at the American Chamber of Commerce in Germany and the board of BITKOM, the IT and telecomm industry association. kodakalaris.com