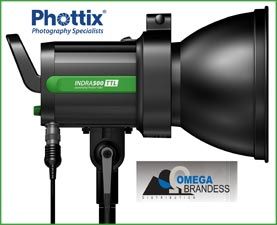 Hampstead, MD—OmegaBrandess is now offering the Phottix Indra500, a 500 watt-second studio flash designed with features for on-the-go photographers. Chief among these is its built-in TTL flash-triggering operation for use with both Canon and Nikon DSLRs, thanks to its Phottix Odin TTL Flash Trigger technology.

The Indra500 TTL provides high-speed sync up to 1/8,000 second, allowing wider apertures while still being able to control ambient light. It also allows eight stops of power adjustment, from full power to 1/128 power in 1/3 stops. The unit can be powered by either a Li-Ion battery or an AC adapter, making it geared for use in the studio and on location.

“Having high-speed sync on a studio light is a game changer for helping photographers control ambient light,” said Steve Peer, Phottix’s CEO. “We’re very happy with the Indra500 TTL because it provides photographers with a lot of power and many control options.”

Phottix Strato II users can also trigger the Indra500 TTL. With a Strato II receiver built into the Indra, Strato II transmitters can trigger the studio light in manual mode. An optical slave mode is also available. A 3.5mm sync port rounds out the Phottix Indra’s triggering offerings, which is compatible with most major triggering systems.

Phottix offers accessories for the Indra500 TTL studio light and Mitros series flashes, starting with an AC adapter, which can power two Indra500 TTL studio lights in 110 or 220V environments and power hot shoe flashes; and the Indra battery pack. When used with the Indra500 TTL, the battery pack allows photographers to shoot 340 full power shots. Its dual power ports can power two Indra500 TTL lights simultaneously. And the battery pack’s LED display provides instant visual feedback on power remaining in the 5000 mAh or 10000 mAh cells. In addition, its USB charging port permits easy charging of smartphones or tablets, and it can power hot shoe flashes. With cables compatible for Phottix, Canon, Nikon or Sony flashes, the battery pack is said to have ultrafast flash recycle times for small flashes.

The Indra500 TTL studio light, battery pack and AC adapter are available from OmegaBrandess. The Indra500 TTL light and battery set is priced at $1,295. phottix.com and omegabrandess.com