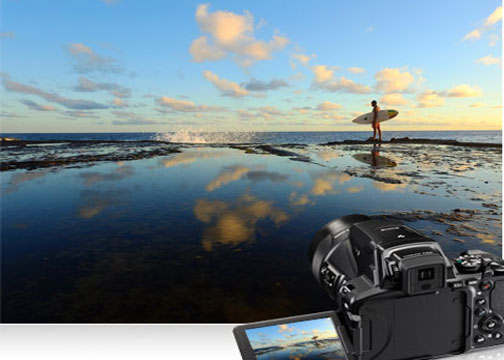 Ultra-zoom, point-and-shoot compact cameras comprise a vibrant and enduring niche because they appeal to a broad spectrum of consumers. From casual shooters to serious enthusiasts—and even some pros—these all-around imaging tools have appeal.

Bridge cameras combine the convenience and simplicity of P&S operation with the high performance of full-system cameras. They allow shooters to capture everything from the widest landscapes to dynamic close-ups in precise detail—all without changing lenses.

These compacts are responsive, satisfying to use and deliver impressive imaging performance, even at high ISOs. Some provide really long zoom ratios—up to an astonishing 83x—rapid burst rates of 5–10 frames per sec and beyond, plus large sensors. With the form factor and feel of compact DSLRs, the models detailed here all deliver a fulfilling shooting experience and impressive real-world performance sufficient to meet the needs of your most demanding customers.

While the number of manufacturers competing in the long-zoom camera space has dwindled somewhat over the past few years, it’s notable that three of the cameras detailed here have 1-inch image sensors in lieu of the once nearly universal 1/2.3-inch sensors. And nearly half provide 4K UHD video capture at 30 fps or higher. These are clear signs that the target audience for ultra-zoom cameras is becoming more sophisticated, and manufacturers are responding with models offering higher image quality, particularly in low light, and greater image control, especially over creative use of depth of field. These technical trends should accelerate going forward.

Moreover, any of the models we’ve selected can provide an excellent backup to an enthusiast’s DSLR or mirrorless system. They’re even a viable option for serious shooters who want to travel light while seeing the sights.

The RX10 IV boasts an impressive autofocus acquisition time of 0.03 second. It captures 4K UHD video at 30 fps and Full HD 1080 video at 120 fps. It provides sensitivity settings to ISO 25,600 and incorporates an ultrafast hybrid AF system with 315 phase-detection points. This enables a 24-fps, full-res burst rate with full-time AE/AF. Other key features include: Optical SteadyShot image stabilization (IS) with 4.5 steps of shutter speed improvement; a 2.35M-dot OLED EVF; a 3-inch, 1.44M-dot, tilting touch LCD; the ability to save 8MP stills while recording video; moisture resistance; and built-in Wi-Fi, NFC and Bluetooth. $1,700. sony.com

This crisply styled, super-telephoto compact continues to sit at the pinnacle of its class. This is due to its incredible 83x zoom ratio, 24–2,000mm f/2.8–6.5 Zoom-Nikkor Super ED VR lens. The lens will fill the frame with subjects hardly visible to the shooter. And it also provides built-in dual-detect optical vibration reduction (VR) that provides a 5-stop advantage in minimizing the effects of camera shake.

In addition, to keep a subject in sight while zooming in, users can press the P900’s snap-back zoom button for a quick zoomed-out view. Once they find the subject, they can release the button and the P900 will zoom right back in. Adding to its impressive full feature set, the P&S also offers 166x dynamic fine zoom and 332x digital zoom, effectively quadrupling its optical zoom range.

The point and shoot also offers a 638K-dot, pop-up OLED Tru-Finder EVF plus a 180º tilting, 3-inch, 921K-dot LCD. It achieves Full HD 1080p video capture at 60p, 60i and 24p. And it incorporates 5-axis Optical SteadyShot hybrid image stabilization that works for both stills and video. Other features include: built-in Wi-Fi, NFC and GPS; a maximum burst rate of 10 fps for 10 frames; and the ability to view 4K still images on a compatible TV via HDMI output. $449.99. sony.com

Plus, with a press of one button, its zoom-framing assist function automatically has the camera zoom in and out to keep the subject in the frame while using extreme telephoto focal lengths. Additionally, a zoom memory function lets users save a zoom position and return to it immediately when the camera is powered on. They can also save a manual focus position.

The B700’s advanced sensor and processor deliver a continuous full-res RAW burst rate of 5 fps, 4K UHD video capture at 30 fps and sensitivities up to ISO 3,200 to facilitate low-light work. Complementing this is a combined dual-detect, 5-axis optical and digital image stabilization system that minimizes the effects of camera shake.

An upgraded version of Canon’s acclaimed 50x zoom, all-in-one compact, the SX540 HS has a higher-res 20.3MP, 1/2.3-inch CMOS sensor that works with an advanced Digic 6 processor. The camera provides an impressive 24–1,200mm focal length range, delivering notable advances in image quality as well as responsiveness. And its improved zoom framing-assist function makes capturing faraway subjects easier with a “lock” feature. Hold the button and the camera zooms out to include a wider view to more easily locate moving subjects; release the button and the lens returns to its original zoom position, keeping the subject in focus.

* All focal length ranges are in 35mm equivalents.