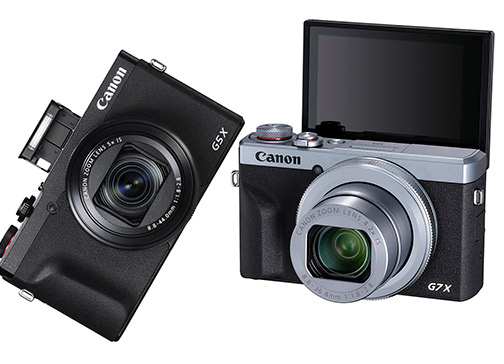 Successors to the PowerShot G7 X II and PowerShot G5 X, respectively, the new cameras add innovative functions. Depending on the model, new features include livestreaming to YouTube via a wireless connection; a pop-up electronic viewfinder (EVF); and 4K video shooting.

“Creators and photographers of all levels are reinventing the way stories are told; as technology has progressed, so have the diverse needs of our customers,” said Kazuto Ogawa, president and chief operating officer, Canon USA, Inc. “With features such as livestream to YouTube and a pop-up EVF, the PowerShot G7 X III and the PowerShot G5 X Mark II are true testaments to the company’s commitment to integrate the latest advancements for those who choose to digitally stream their journeys with the world or seek to scale and capture the highest peaks.”

Even though the PowerShot G7 X Mark III and the PowerShot G5 X Mark II have many individualized qualities, they share core features. Key to both the new models are a 20.1-megapixel 1.0-inch stacked CMOS sensor and the latest Digic 8 image processor. Together they achieve high image quality and fast speeds.

Another shared feature is 4K video recording up to 30p; Full HD recording up to 60p; and 120p recording. They also offer HDR functionality and high frame rate movies with no crop.

The PowerShot G7 X Mark III and G5 X Mark II also achieve high-speed continuous shooting at a maximum rate of 20 frames per sec. In addition, they provide the highest ISO sensitivities in the PowerShot category, with a maximum of ISO 12,800.

In addition to a USB-C charging power supply, they offer Wi-Fi and Bluetooth connectivity for easy sharing of content.

The PowerShot G7 X III is a next-generation vlogging camera. It offers livestreaming to YouTube via a wireless connection. This enables creators of all levels to capture and post content in real time. The camera also offers vertical video support: 4K recording at up to a 30p high frame rate movie with no crop and Full HD recording up to 120p.

In addition, it features a 24–100mm-equivalent, 4.2x optical zoom lens. Its compact body also houses a microphone jack, an improved user interface and creative assist functions for both video and still photography. Available in black and silver versions, it has a suggested retail price of $749.99.