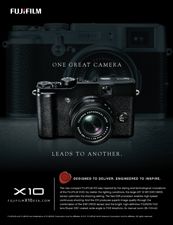 Valhalla, NY—Fujifilm North America Corp. will launch a multimedia digital camera advertising campaign for the 2011 holiday selling season that highlights the global Fujifilm brand as it again focuses on the professional camera business and showcases its high-end X100, the all-new X10, the FinePix F600EXR and its family of long-zoom digital cameras.

The advertising campaign consists of network television, outdoor media, national print and online media buys, including the relaunch of Fujifilm’s Everypicturematters.com website—all developed to address the unique benefits of each camera and highlighting their image quality, design, performance and features for a range of photographers.

“Fujifilm has an incredible lineup of digital cameras for the 2011 holiday season that deliver unsurpassed performance and value to a wide range of consumers and professional photographers, and we want to showcase these products in every way possible,” said Manny Almeida, vice president and general manager, Fujifilm North America Corporation. “We are very proud of the design, exceptional image quality and ease of use that our digital cameras offer, and we are excited for all of the memories that they will capture.”

The new “Bungee” TV campaign showcases Fujifilm’s line of long-zoom digital cameras with the new FinePix F600EXR compact point and shoot taking center stage; the bungee jumping scene puts the camera’s power and zoom capabilities on display. The “Bungee” commercial will air beginning November 13 and during sweeps week, through the end of December on the highly rated television shows and NFL and college football games. To view the “Bungee” video, visit youtu.be/7CGpQECE33I.

The “Bungee” commercial will also run in New York’s Times Square during the most heavily trafficked season, from November through January. And at the 2012 Consumer Electronics Show (CES) in Las Vegas, Fujifilm will continue its campaign outdoors with a large 40-foot by 27.5-foot sign located at the entrance to the Las Vegas Convention Center at Paradise and Convention Way that will feature the expansion of the premium X-series camera line.

The Fujifilm X100 and the new X10, with their retro-design, will see extensive print advertising campaigns showing their style, features and range. The print campaign will be widespread and will appear in magazines and newspapers that focus on technology, luxury goods and advanced photography. Full-page ads for the X100 and X10 will run in The New York Times Magazine on November 20, December 4 and December 11.

To extend the reach of the advertising campaign to as wide an audience as possible, Fujifilm will launch an Internet campaign to create high-impact impressions that take advantage of rich online media with custom ads and video. Specifically, the X100 and X10, along with the FinePix F600EXR long-zoom compact digital camera, will have online advertising running from November through December on top photography, technology, news, sports and entertainment websites. fujifilmusa.com