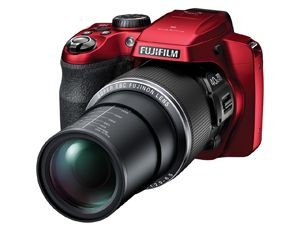 The Fujinon lenses consist of 17 elements in 12 groups and combine aspherical and ED elements to help reduce aberrations and promote a superior level of image quality. Both new bridge cameras are also capable of a super macro mode for users to get as close as 0.39 inch from a subject.

The cameras also employ 16 megapixel 1/2.3-inch BSI-CMOS (backside-illuminated) sensors built to capture low-noise shots at sensitivities as high as ISO 12,800. And specs state they have autofocus speeds of 0.3 second, start-up times of 1.0 second, a 0.5-second interval between shots and a continuous shooting speed of 10 frames per sec (10 frames at full resolution). With their ultra-high-speed shooting of 60 fps (image size 1,280×960) and up to 120 fps (max 60 frames, image size 640×480), these models can capture the action in slow motion.

Designed for easy operation, they provide a mode dial for shooting selection, dual zoom control for speed and zooming, and a 3.0-inch, 460k-dot LCD screen as well as a 200k-dot electronic viewfinder for viewing and framing.

Other features include a dedicated movie button to start recording 1080i movie capture at 60 fps with stereo sound and slow-motion capture at 480 fps. Users can even take still photos during video recording, and there are various in-camera movie-editing options, including movie trimming and movie join.