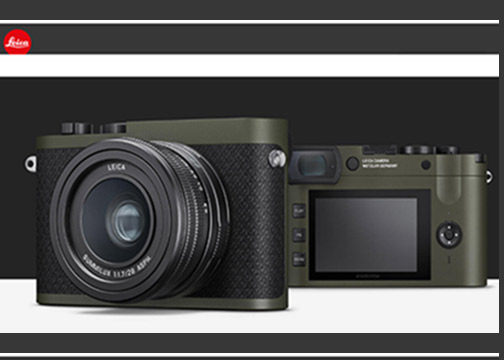 Allendale, NJ—As part of the Celebration of Photography in Wetzlar, Leica Camera AG announced a product variant of the Leica Q2 full-frame compact camera. The Leica Q2 Reporter continues a tradition of Leica cameras that are specifically geared toward the challenging working environments of reportage and press photographers.

Consequently, instead of the traditional leather trim, the Q2 Reporter sports a “body armor” made of Kevlar. The synthetic material is widely used in the production of high-grade protective clothing.

In addition, the camera’s matte-green finish complements the Kevlar. Moreover, the paint is scratch and abrasion resistant. The result is an exterior that is both hard-wearing and discreet.

The variant offers the same level of protection against dust and water infiltration as the serial model. Furthermore, the Kevlar trim, characterized by a distinctive weave pattern, effectively protects the camera against mechanical, chemical and thermal hazards.

Although the fabric is initially near black, exposure to natural UV rays will gradually change its tone, until it closely matches the camera’s paint finish. In addition, the Kevlar fibers become slightly more raised over time, which further improves the photographer’s grip on the camera.

What’s more, the camera’s overall design places a strong emphasis on it having a discreet appearance. For example, the red Leica logo on the front was omitted. In addition, Leica inlaid the engravings and operating elements, so that neither their purpose nor the camera’s true value are apparent.

The Leica Q2 Reporter is now available with a suggested retail price of $5,995.

Based on the Q2 Monochrom, this version employs an exclusively black–and–white sensor. Leica believes this makes “it an even more purist embodiment of a classic reportage camera.”

“With its Kevlar trim, scratch-resistant finish and pared-down design, the Leica Q2 Monochrom Reporter is a robust, yet discreet companion, even in challenging shooting situations,” the company added.