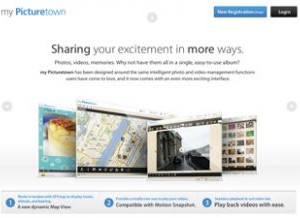 Melville, NY—Nikon upgraded its my Picturetown (mypicturetown.com) image sharing and storage service with new and better functions and features, including simpler playback of movie files and support for the playback of motion snapshot files recorded with the new Nikon 1 advanced interchangeable-lens cameras.

In addition, GPS map view has been expanded and improved to display log data recorded using the GPS function built into Nikon’s recently announced Coolpix AW100 on a map, allowing users to view and share a record of their movement over a specific period of time.

Now, motion snapshot files recorded with Nikon 1 J1 and V1 cameras can be uploaded to, played and shared on my Picturetown. This allows users to share motion snapshot, a new form of imaging expression, with family and friends. In motion snapshot mode, pressing the shutter-release button records a still image and about a second of movie footage beginning before and ending after the time the shutter-release button was pressed. Movies recorded in this mode are played back in slow motion at 0.4x normal playback speed of the movie and a still image. This allows photographers to express moments that show, for example, slight changes in expression, the rustling of tree leaves or fluctuations in nature.

For movie playback, with the current version of my Picturetown, movies are played back in a separate window; now with the new version operation has been improved so that by clicking on a movie thumbnail, movies begin playing in the current window, regardless of the selected view. As movies can be played back at the preferred thumbnail size, the new movie function is also convenient because it enables consecutive playback of multiple movie files. In addition, full-screen display in the browser window is also possible.

The site also offers improved GPS functions with map view. The GPS function built into models such as the Nikon Coolpix AW100 periodically records position information as GPS log data. This log data can now be displayed in map view to show the photographer’s route over a specified period of time. Additional features, such as a graph display of GPS log altitude and display of heading information and location names (points of interest or POI) recorded in photo information allow them to view a detailed record of shooting scenes along with the photos. In addition, by sharing an album on my Picturetown, photos and the route can be shared with family and friends.

In August 2011, Nikon celebrated the fourth anniversary of the my Picturetown service. Since its launch, my Picturetown membership has grown to 1,500,000. nikonusa.com