The P950 also offers a myriad of other feature upgrades. They include RAW (NRW) image capture as well as 5.5 stops of Dual Detect Optical vibration reduction image stabilization. Moreover, the P&S maintains a compact, portable body.

In addition, it provides dedicated birdwatching, moon and other scene modes, to capture imagery in a variety of scenarios. 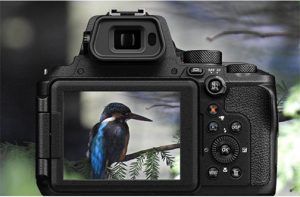 Along with its 83x optical zoom Nikkor lens, the 16-megapixel Coolpix P950 is engineered to deliver image quality from extreme distances. Beyond its 24–2000mm f/2.8–6.5 lens, the P950’s Nikkor optics and VR advanced stabilization technology allow stargazers and birdwatchers to capture photos or 4K UHD videos at extreme distances.

What’s more, by using the camera’s 166x Dynamic Fine Zoom technology, faraway subjects can be captured. And its macro shooting capabilities will get photographers as close as 0.4 inch from a subject.

They also can rely on the P950 to photograph subjects with accuracy and focus, thanks to its target-finding autofocus abilities. Other specs include 7-frames-per-second continuous shooting and ISO sensitivities up to 6400.

In addition, an option for photographers of all skill levels, the P950 has user-friendly controls and an intuitive menu system. Moreover, a 2.36M-dot electronic viewfinder permits users to capture and review shots. Plus, it has a 3.2-inch, 921K-dot vari-angle LCD with antireflective coating and five levels of brightness adjustment.

Further, the P950 has an accessory shoe to enable compatibility with a variety of useful accessories, including the optional DF-M1 Dot Sight. This accessory helps users locate subjects and compose shots from faraway distances.