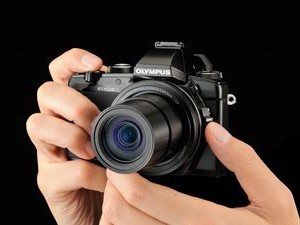 Center Valley, PA—Olympus united many of the best features found across its camera lineup in the new Stylus 1, which is designed for semipro shooters who want optical flexibility, DSLR operation and convenient portability in a one-size-fits-all package.

The Stylus 1 includes an i.Zuiko lens and a large 1/1.7-inch BSI CMOS sensor coupled to a TruePic VI image processor, along with the built-in electronic viewfinder (EVF) from the Olympus OM-D E-M5 and Wi-Fi connectivity.

The new ultra-slim 10.7x, 28–300mm i.Zuiko lens employs constant f/2.8 brightness across its zoom range and can capture wide to telephoto shots, macro shots from 2 inches away, and pro-style stills with defocused backgrounds and crisp images. The large diameter lens incorporates a built-in VCM image stabilization mechanism engineered to eliminate the effects of camera shake. When the lens is not in use, it retracts fully into the camera body, behind a removable automatic lens cap.

The Stylus 1 is also the first Olympus enthusiast, premium compact camera equipped with a built-in electronic viewfinder (EVF). The 1.44-million-dot resolution LCD EVF has a 1.15x viewfinder magnification rate (0.58x equivalent) and 100% field of view—just like a DSLR. An eye sensor automatically switches the live view display from the 3.0-inch, 1.04-million-dot tiltable touch screen to the EVF as the camera approaches the user’s eye. A variety of information is displayed on the EVF screen, including exposure and color.

For operability, there are hands-on controls, including a hybrid control ring that’s built around the lens and can be switched between digital and analog operation with a control lever. In digital mode, the ring turns smoothly for fine zooming or manual focusing; in analog mode, users can adjust settings like aperture and shutter speed. A sub-dial, positioned near the shutter button, provides further operational accuracy. The camera also has a hot shoe for accessories, built-in flash, a side zoom lever with variable speeds and two customizable function buttons for access to commonly used settings.

To set up its Wi-Fi, users can scan the QR code displayed on the LCD with a smart device, which syncs with the Wi-Fi network created by the camera. The free Olympus Image Share 2.1 smartphone app synchronizes a smartphone and the Stylus 1 so the camera’s “live view” is displayed on the phone and the camera can be controlled by touching the smartphone’s display. Users can wirelessly adjust camera settings, such as shutter speed, aperture, ISO and exposure compensation, as well as operate the live bulb mode from their Wi-Fi devices. They can also use their smartphone to embed GPS information into their images.

Several new accessories complement the Stylus 1: the EP-11 eyecup, which cuts out peripheral light for improved visibility in bright conditions; a full-body jacket; and the CLA-13 converter adapter for the TCON-17x 1.7x teleconverter lens that extends the focal length of the camera to 510mm and retains the brightness of a constant 1:2.8 aperture.