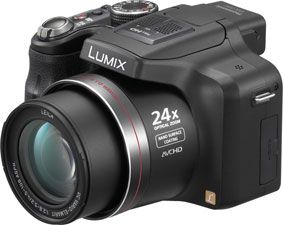 Powered by a 12.1 megapixel “Hi-Speed” CCD sensor, the FZ47 is said to produce the high-speed, large-capacity signal processing required for 1,920×1,080 Full HD video recording in the AVCHD format, and high-speed continuous shooting. The Venus Engine FHD processor powers the camera’s Intelligent Resolution technology, which enables the zoom to be extended 1.3x times to a 32x. Specs say the FZ47 can take high-res shots at 3.7 fps at 12.1MP and at 10 fps at 3MP. Users can also simultaneously take a 3.5MP photo while shooting video. And with Panasonic’s Sonic Speed AF, its start-up time is about 35% faster than the Lumix FZ40.

Additionally, the FZ47’s 24x optical zoom is optimized for video recording with a mechanism designed to minimize the noise of AF and zooming. Its video capability is complemented with Dolby Digital Stereo Creator to produce realistic audio and a wind-cut function.

Other features include: 3D photo mode to take 3D photos that can be played back on MPO-compatible 3D devices; a 3.0-inch LCD; and a social media connection that allows the camera, once connected to a computer, to prompt users with an menu asking if they want to share images online—no software needed.

The Panasonic Lumix DMC-FZ47 is available in black for an MSRP of $399.99. panasonic.com