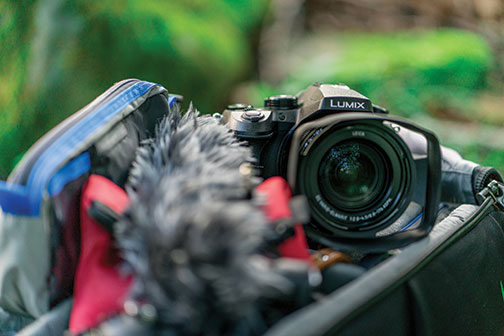 The sensor was designed to improve the S/N ratio to reduce noise, even when shooting at ISO 12,800. Specs state the FZ2500 also achieves autofocus speeds of 0.09 sec and 12-frames-per-second (AFS) high-speed bursts for capturing fast-moving subjects in focus for up to 100 JPEG or 30 RAW images.

The FZ2500’s lens is comprised of 16 lenses in 11 groups. The lens system is designed for high optical performance with minimum ghost and flaring. Notable is a guide-pole mechanism commonly used in professional video cameras. Along with an inner zoom structure, the guide-pole suppresses image shift by approximately 80% compared to the FZ2500’s predecessor. The Leica lens also incorporates a 9-bladed diaphragm to create soft, rounded defocus.

In addition, a 4K Photo function captures photo opportunities at 30 fps by extracting the best frame from a 4K burst file. Users can save these still photos in 8 megapixel equivalent resolution.

Another key feature is the camera’s 2,360K-dot OLED live viewfinder (LVF). Adoption of OLED for the LVF achieves a minimum time lag of less than 0.01 sec as well as 10,000:1 high contrast. Furthermore, the LVF is complemented by a 3-inch, 1,040K-dot rear touch screen. The vary-angle screen has a 100% of field of view and enables high- and low-angle shots.

Other features include: a post-focus function that enables the selection of a frame’s in-focus area even after shooting; a focus stacking function that lets users take multiple images of the same frame with different areas in focus, then combines all or selected areas into one image; a 3.5mm microphone jack/3.5mm headphone jack; and Wi-Fi connectivity with smartphones. $1,199.99.