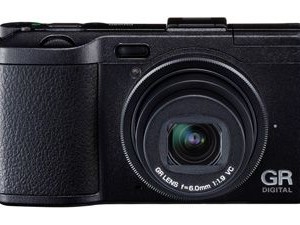 For enhanced quick-shooting capabilities, Ricoh incorporated a hybrid AF system and an image-sensor-shift image stabilization function that makes use of Ricoh’s independently developed external AF sensor. The camera also offers a 3.0-inch, 1.23 million-dot VGA LCD monitor and an electronic level that detects inclination in the tilt direction as well as the conventional horizontal direction. Also added was dynamic range compensation (DRC), to minimize the effects of blown highlights in bright areas and crushed blacks in dark ones when shooting backlit or high-contrast scenes; and interval composite, which combines images shot at a certain shooting interval.

Key features of the GR Digital IV include: improved AF speed and accuracy due to the hybrid AF system; Ricoh’s external AF sensor with a maximum of 190 AF points; an AF focusing time of 0.2 sec; improvements in the AF speed for macro shots that are taken using only the CCD contrast AF method; quick-shooting capabilities by performing the metering with only the external AF sensor, whose metering information can be displayed on the LCD; an upgraded auto bracket function with conventional exposure and white balance, a contrast bracket setting and DRC bracketing; multiple exposure shooting; and the new GR Engine IV image processor with color reproduction enhancement and color noise reductions when taking high-sensitivity photographs.

Ricoh’s signature 28mm f/1.9 GR lens is built to suppress chromatic aberration and distortion, and it works with the first image-sensor-shift IS function in the series to achieve a stabilization effect equivalent to a shutter speed increase of 3.2 stops.

Also new is the expanded my setting function, which now offers 12 preferred camera settings; and support for wireless Eye-Fi cards so images can be wirelessly transferred to a computer or uploaded to a photo-sharing site.

Ricoh’s GR Digital IV ($599) comes in black, and a special white edition will be offered for a limited time in a kit for $649. ricoh.com 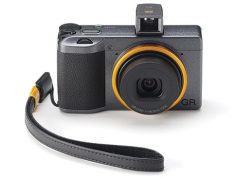 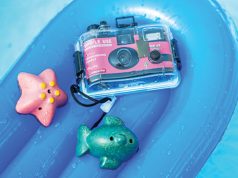