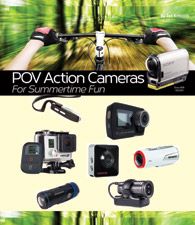 Summer exploits usually mean sporting events and antics in the great outdoors. And capturing those moments with POV action cameras is growing in popularity for consumers. No longer just a burgeoning category catering to enthusiasts and extreme sports athletes, this has become a market attracting travelers and budding filmmakers alike.

The looming addition of 4K Ultra HD resolution could pave the way for greater flexibility in how content is shot and edited. Time will tell, but for now, these are the current crop of POV cameras making noise in the market.

GoPro Hero3+
Despite expectations for the Hero4 and a leap into the realm of 4K video capture, the Hero3+ is still the GoPro flagship, and it isn’t going anywhere. Easily the most robust camera GoPro has made, the body is 20% smaller and lighter, with improved battery life that should keep it going a further 30%. Faster built-in Wi-Fi enables smoother previewing and sharing to social media via the iOS and Android apps, coupled with improved functionality using the wireless remote.

It was the first model to use superview mode, a wide-angle setting that captures more along the fringes of a shot, thus making selfies and landscapes easier to frame. It was also the first to use the auto low-light mode, changing frame rates based on the lighting conditions. The Black Edition also sports better audio recording to capture more of the relevant sounds, particularly for higher speed activities where noise and wind reduction are kept at bay.

It’s not quite 4K, but it can manage shooting at that resolution on a slower 15p frame rate. There’s also 1440p in 48p, 1080p in 60p and 720p in 120p, the latter of which could be used for slow-motion video playback. Time-lapse mode also offers seven intervals for capturing a long scene. Still images top at 12MP at 30 frames per second.

Panasonic HX-A500
This waterproof, 4K/30p wearable camcorder provides Wi-Fi and NFC connectivity to a smartphone to share its 4K video online. The main unit is separate from the lightweight lens unit, which weighs just over an ounce, so users can comfortably mount the lens at face level for hands-free POV shooting.

The A500’s newly designed main unit has a 1.5-inch LCD for checking movies on location and changing settings. Operations are performed using the joystick beneath the LCD, with visual feedback from the LCD. Other tech includes: a 1/2.3-inch BSI sensor engineered for high-sensitivity shooting with less noise in images shot indoors or in dim light; a Crystal Engine Pro+ to handle the 4K video at 30 fps; and a 160º ultra wide angle for an immersive view.

Waterproof for 30 minutes in 10 feet of water and dustproof, the A500 offers tilt correction and image stabilization. Available with Full HD in standard resolution, its level shot and image stabilizer functions help it capture easily viewable, fast-action sequences. And users can shoot at 1,920×1,080 at 60 fps; 1,280×720 HD at 120 fps; and 848×480 pixels at 240 fps. They can then play back in slow motion. The A500 comes with a head mount that’s supported at both ears and the back of the head to make wearing it feel more natural. Also included is an armband-style case. panasonic.com

Sony HDR-AS100V
Despite coming with a housing that protects the HDR-AS100V from the elements, the body itself is splashproof, so it can work just as well when rain or snow falls on it. A new ultrawide, 170º Carl Zeiss Tessar lens is able to capture more light. And automatic image stabilization now compensates for the type of movement it’s being used for—be it when walking, running, cycling or driving.

A 1/2.3-inch Exmor R BSI CMOS sensor can record in 1080p at 60 fps in MP4 and Sony’s XAVC-S HD format, along with 1080p/24 fps, plus high-speed 720p video at 120 fps and 240 fps shooting with sound. Wi-Fi and NFC are included for connecting and pairing with compatible smartphones and tablets. GPS is also built-in with added functionality via Sony’s PlayMemories app. There’s also a built-in tripod mount, and SteadyShot image stabilization offers three-way shake canceling functions.

The waterproof live-view remote and its color LCD wirelessly connect to the main unit to make it easier to preview video and photos and control playback. The base model doesn’t include the remote, but a bundled version is available. $269; $399.99 bundled with live-view remote. sony.com

V.I.O. Stream HD
V.I.O. has been in the POV camera business for at least a decade, and the Stream HD is the company’s latest foray. Modular by design, this model doesn’t come in just one configuration but rather a number of variants, depending on use case. It can be used for commercial purposes connected to a system via USB, or in dual-use as a stand-alone camera with an optional battery pack to stream on its own. There is an open API for developers and enterprising DIYers to integrate it into existing systems or applications.

The camera is rugged—it’s waterproof (with an IP67 rating), shockproof and dustproof. It can shoot 1080p at 30 fps, 720p at 60 fps or 480p at 30 fps. There are body, vehicle and static mounting options, and V.I.O. is marketing the camera equally to outdoors and sports enthusiasts, as well as those in law enforcement, medical and military capacities.

It does also support the Real Time Streaming Protocol (RTSP) for streaming content directly to a server, if need be, thus working seamlessly with security systems or even home-based surveillance. This doesn’t preclude it from being an action camera, however, since it can run up to 2.5 hours on one charge and can withstand punishment from the elements along the way. $329.99. vio-pov.com

Liquid Image 800 – Ego LS
Known more for its wearable cameras nestled into goggles of various types, Liquid Image is taking a stab at a stand-alone, water-resistant camera that is the first to offer 4G LTE connectivity for streaming on the go. In all, the Ego LS, which is currently backordered, has four wireless features: 4G LTE; Wi-Fi; Bluetooth; and low frequency RF.

Unlike competitors, the Ego LS video mode can only record 1080p footage at 30 fps, with no way to go as high as 60 fps or 120 fps. It can go to 60 fps in its “high action” mode, which shoots 720p video. Motion detection and continuous shot modes are also included, with Liquid Image suggesting they could be used for security or monitoring purposes over 4G LTE or Wi-Fi. This includes file transmission, where an HD video and low-resolution WQVGA video are copied over to the microSD card. It will also shoot still images at 8 megapixels in photo mode.

The free Liquid Image apps for iOS and Android can stream live view, preview recorded footage, edit clips, transfer to a mobile device, adjust settings and act as a remote control. The addition of Bluetooth makes it possible to pair with peripherals like headsets and remote microphones. Low frequency RF can keep the Ego LS in standby for more than 24 hours without battery drain. $199.99. liquidimageco.com

Lifelogger
Less a POV action cam and more an everyday accessory, the Lifelogger doesn’t have the rugged design or robust features of others in the category. Instead, its focus is on capturing slices of life that can range from a baby’s first steps to a family gathering or even a walk through a vacation excursion. It is limited to 720p at 30 fps and a 100º viewing angle. It does have 32GB of internal storage with a microSD slot to expand that to 64GB.

Unlike Google Glass, which is worn like a pair of glasses, the Lifelogger wraps around the back of the head and over an ear, with the camera peering out just below the temple. It has GPS and a compass built in to record location data, plus Bluetooth 4.0 to pair with smartphones or tablets to relay GPS and pedometer information. Wi-Fi direct can be used for live view, and still images can be snapped at the max 5MP resolution.

Its wireless connection also makes it possible to live stream content, so long as the mobile device has a data connection to the Internet. Lifelogger will have a cloud service to upload footage rather than having to store it on the phone or tablet’s storage. Its Android/iOS app allows users to set up the device, input cloud log-in credentials, manage recorded data, turn on/off live streaming and check memory or battery status. Currently on Kickstarter, it will come to market in 2014. $169.99. lifelogger.com

Looxcie 3
In the same vein as the Lifelogger, the Looxcie 3 is designed to be social in that it’s easy to wear almost anywhere to record almost any setting. Coming in a range of colors for the fashion conscious, the square-shaped camera can clip on to clothing or stand alone on the included tripod. It can shoot in 720p at 30 fps at a 100º angle and capture still images at a max resolution of just 1 megapixel.

There is no internal storage, but a 64GB microSDHC/XC card can record up to 90 minutes of footage. Incidentally, the Looxcie 3’s rechargeable battery also tops out at 90 minutes. Built-in Wi-Fi and the free Looxcie apps for iOS and Android make it possible to stream footage live to others with two-way chatting. Facebook integration also allows users to stream to friends directly.

Despite the social focus, there are several mounts available, including for helmets, baseball caps, handlebars and surfboards, a multiuse arm and even a waterproof case. $99.99. looxcie.com

iON Air Pro 3 Wi-Fi
With the signature cylindrical design of iON’s previous models, it weighs in a bit lighter and offers more durability and image quality. The waterproofing is improved to a depth of 49 feet using the same type of integrated housing the previous model had, along with a waterproof microphone. Footage was bumped up to 1080p at 60 fps, and a vibration reduction setting was added to help combat shake. It also has its standard on-and-off toggle switch at the top, coupled with an improved microphone.

As the Wi-Fi edition, it comes with iON’s Wi-Fi Podz that clips onto the back and works with the iOS and Android apps to toggle with recording and playback controls as well as transferring files. It can take 12MP photos using its Sony BSI CMOS sensor, and 8GB of free cloud storage is included with the camera. $349.99. ioncamera.com

Polaroid XS100i Wi-Fi Extreme
This Full HD 1080p, waterproof action cam comes with built-in Wi-Fi and a full mounting kit. The Wi-Fi allows users to adjust settings remotely, watch video in real time and share videos instantly via social media. The lightweight camera has a vibrate feature that confirms functions when visual confirmation isn’t practical, and an auto-rotation G-sensor for “which end is up” assurance.