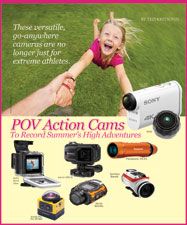 POV action cameras have not only grown in sales, they’ve also advanced in sophistication, making this category one of the more intriguing to watch. Their increased capabilities are also leading to versatility, where action cams can be used as dash cameras in vehicles or for sightseeing on vacation excursions.

The lack of mainstream 4K content is providing a real opportunity for action cam manufacturers to give consumers the ability to create their own. In addition, 360º cameras are beginning to trickle into the market as well. Here’s a look at eight of the most interesting POV action cameras from a range of manufacturers.

GoPro Hero4
Arguably the most complete action cam out there, the Hero4 is the first from GoPro to offer 4K recording at 30 frames per sec, along with 2.7K at 50 fps, 1440p at 80 fps and Full HD 1080p at 120 fps. QuikCapture simplifies operation, fusing the power and recording functions with a single one-second press.

A firmware update released in February added new features and enhancements. A new time-lapse video mode expedites the process of creating time-lapse videos, though the original method still exists for users who prefer more control. Auto image rotation finally automates a photo’s orientation, which was lacking in GoPros up until now. The burst mode includes the option to space out 30 frames over six seconds, essentially shooting five images per second, and making it easier to capture quick action shots.

The Black edition gets two video upgrades. It now shoots HD 720p at 240 fps for smooth slow-motion video, albeit only in narrow vision, as it won’t work in wide angle. And the 2.7K res at 50 fps was bumped up to 60 fps.

The Silver edition Hero4 is still limited to 4K at 15 fps and slow-motion 120-fps video at 720p. Most of the other features seen in the premium Black edition are included in the silver, with an added touch display. Black, $499.99; Silver, $399.99. gopro.com

Sony FDR-X1000V
Sony entered the 4K arms race by outfitting this cam with the ability to shoot in 4K (3,840×2,160) at 30 fps. The 170º ultra-wide-angle, f/2.8 Zeiss Tessar lens is wider than the Hero4 Black’s, and it works with Sony’s back-illuminated Exmor R CMOS sensor and Bionz X processor. Its new version of SteadyShot image stabilization is designed to be three times more effective at reducing the effects of shake.

The components inside fall in line with other high-end Sony cameras, including the full-pixel readout technology. By reading and processing data from all of the sensor’s pixels, the camera is said to produce smoother and more detailed 4K and HD videos in various formats, including the standard MP4 and the high-data-stream XAVC S codec.

It can shoot 1080p at 60 fps and slow motion at 120 fps. Slowing down even further to 240 fps is only available at 720p. It has Wi-Fi/NFC and GPS built in and offers loop recording, live streaming and 10 shooting modes. It comes with a waterproof housing that takes it down to 15 feet underwater; without the housing, the X1000V is splashproof. $449.99 sony.com

Garmin VIRB XE
Continuing to claw away for a piece of the pie, Garmin’s VIRB XE is its latest flagship action cam. Though it doesn’t offer 4K recording, it shoots in 1440p at 30 fps and 1080p at 60 fps. It also captures 12MP stills, as well as time-lapse photos while recording. For the first time, there are manual controls, so users can toggle ISO, white balance, exposure, sharpness and color profile control.

The body was designed with durability in mind; it can descend to depths of 164 feet without an external waterproof housing. It’s also compatible with GoPro’s mount system, opening up possibilities for increased placement. Bluetooth 4.0 functionality makes it possible for the wearer to pair a microphone and narrate during the action. Technically, the VIRB is capable of supporting wearable trackers that use Bluetooth, but Garmin hasn’t yet committed to opening that door.

Some trade-offs were required for Garmin to put this package together. The lack of an integrated live display is offset by the VIRB mobile app, which also makes it possible to copy over video and photos directly. There is no HDMI output or barometric meter any longer, either. And battery life was decreased to “up to two hours.” $399.99. virb.garmin.com

Panasonic HX-A1
The HX-A1 does away with half of its predecessor’s form factor, the cylindrical lens design is now on its own, rather than staying tethered with a rugged cable. This unit isn’t meant to cater to pros or serious amateurs, given its limited scope. It shoots 1080p at 30 fps, 720p at 60 fps and slow motion in 120 fps at a reduced 848×480 resolution. Still images max out at 2.7 megapixels.

Panasonic made it dustproof, waterproof to depths of 5 feet, shockproof to 5 feet and freezeproof to 14º F. There is no display on the unit itself, as that role is provided by a dedicated mobile app connected via Wi-Fi Direct. The Wi-Fi functionality, or “wireless twin camera,” extends to Panasonic’s W970 and W870 camcorders, where the HX-A1’s footage of the same event can be superimposed onto the camcorder’s shot.

Plus, a “0 lux night mode” allows the infrared (IR) filter embedded in the camera to work with an IR light source to shoot in pitch darkness. It can also be plugged into a computer and used as a webcam.
$199.99 panasonic.com

Kodak PixPro SP360
JK Imaging, which licenses the Kodak brand, manufactures the SP360, outfitting it with a fixed lens on top that captures 1080p footage in 360º. It does that by recording at 30 fps with a 16MP MOS sensor in sphere/ring or panorama mode. It can go lower, splitting the front and rear views into separate 180º vantage points, or widen the front alone to 212º. Dome mode provides a less rounded effect at 214º.

Slow-motion clips at 120 fps are at a lower 848×400 resolution. Still images are at 10MP, including 10-fps bursts, and there’s also a time-lapse mode. A motion detector can instantly start recording when a subject moves. The body is water resistant, can withstand a drop of 6.6 feet and will work to a low of 14º F. A waterproof housing and various mounts come in a separately sold kit.

A dedicated mobile app handles all the controls, as well as preview and playback footage via Wi-Fi Direct. $349.99. kodakpixpro.com

TomTom Bandit
TomTom says the Bandit is the first ever camera to come with its own media server, a feature designed to expedite file transfer over to a smartphone or tablet. It also offers a certain degree of automation, using embedded motion and GPS sensors to tag the most exciting moments using metrics like speed, altitude, G-force, acceleration and heart rate.

Through the companion iOS app (Android coming soon), users can tag whatever they want manually with the Bandit’s tagging button or the remote control. The signature “shake to edit” feature reduces editing time to mere seconds when users literally shake their mobile device and let the app do the work of putting the clips together.

360fly
This unique camera shoots in 360º at a resolution of 1,504×1,504 at 30 fps. It is technically water resistant down to a depth of up to 164 feet, but it’s not fully waterproof, so it’s better suited for surface swimming or shallow diving. It’s also shockproof enough to withstand about a 5-foot drop. And specs say it can operate in temperatures from -4º to 104º F.

Its 32GB of internal storage isn’t expandable via a memory card slot, limiting how much footage can be shot without the need to transfer it on the fly (no pun intended). The 360fly app can be used to preview live video from the camera, share and edit. A variety of mounts will be available for the 360fly when it ships in August. $499. 360fly.com

Ricoh WG-M1
Sporting a unique form factor for active, outdoor shooters, the WG-M1 is waterproof to 32 feet, shock resistant against a 6-foot fall and cold resistant to 14° F. With an ultra-wide-angle 160º, fast f/2.8 lens, it records Full HD 1080p movies with a realistic sense of depth. It offers a 14MP CMOS sensor, 10-fps high-speed, continuous shooting and integrated Wi-Fi. Its lightweight body features an outdoor-oriented design, large control buttons and a 1.5-inch LCD monitor. It comes with a carabiner-equipped strap for carrying and a WG adhesive mount to attach the camera to different surfaces. Optional accessories are available, including a wrist strap mount, a helmet mount and a magnet mount. $199.95. ricohimaging.com