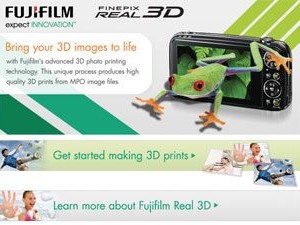 So, it’s fair to say that 3D technology has been on quite the roller coaster ride the last few years. We’ve seen the good, the bad and the ugly at various industry trade shows since 2008, and we are left wondering what kind of progress, if any, the tech has actually made. And perhaps the bigger notion to ponder is whether or not Joe and Jane consumer really care.

There are several moving parts to the entire 3D equation, not the least of which is the slow pace of consumer adoption for 3D-capable TVs. While the imaging industry has tossed out a few 3D-capable capture devices over the last several years, if consumers have no way of enjoying the content they’re producing with these devices, what’s the point?

Still others feel the overall pace of technology in the imaging industry today is simply overwhelming many people.

“The typical consumer might be reeling a bit when it comes to all this information. 3D may have had its day in the sun but now they are reading about things like 4K tech on the TV front,” began New York photographer, Jim Cummins. “And on the capture side, do you buy a 3D-capable camera or camcorder with all that’s happening with camera tech today—mirrorless cameras, full-frame DSLRs, etc? Sticking your flag in the ground on something isn’t an easy decision, and 3D seems very niche to me.”

Many of the major CE manufacturers that have a stake in both 3DTVs as well as 3D capture devices (Panasonic, Sony, Samsung, etc.) are attempting to bundle the sale of the TV with a 3D still or video camera or another 3D device that is compatible with the set. While most of these manufacturers aren’t exactly quick to part with any hard and fast statistics, it’s fair to say the results of these efforts have fallen short of expectations.

Luke Warm Demand
On the 3D print side of the equation, services are few and far between as consumer interest simply has not dictated a more robust growth pattern here. Fujifilm’s Manny Almeida, senior vice president and general manager, Imaging and Electronic Imaging divisions, explained that despite the fact Fujifilm has been a player in this space since 2009, the demand simply isn’t there.

“Unfortunately, consumer demand for 3D imaging and viewing has not grown significantly over the past few years, though Fujifilm remains committed to 3D photography. The FinePix Real 3D W3 digital camera is available and continues to offer the consumer the ability to shoot video or stills in stunning Real 3D quality,” he said. “The W3 can also be directly connected to most 3D televisions, via HDMI, and display video or stills in full 3D quality. 3D printing services continue to be available through the Fujifilm 3D printing website, fujifilm3dprints.com, where consumers can learn about 3D printing solutions and have their extraordinary 3D prints come to life.”

The 3D prints from the aforementioned Fujifilm service we’ve eyed are impressive and don’t require special glasses to view.

3D Services Do Exist
Though not easy to find, there are a few other websites that also offer 3D print services, with perhaps the most prominent being Start3D.com. A fairly straightforward setup allows the user to upload either a picture captured with a 3D camera, or two pictures shot from slightly different angles with a regular digital camera, to the site with the resulting 3D print mailed out a few days later.

Another site called CreativeApplications.net offers a similar setup with an app for the iPhone called 3D Me that allows users to capture and share 3D images without the need for 3D glasses. Their tagline caught our attention: “The world isn’t flat so why should your photos be?” creativeapplications.net/iphone/3d-me-iphone

Lenticular Tech
We have also been treated to a few variations on the 3D theme the last several years with a service dubbed Tracerpix from Tracer Imaging, which is one of the more interesting we’ve played with. The creators of the technology tell us the complex process of creating a digital image that incorporates motion or 3D imagery is called “interlacing.” The specially prepared image contains data from one or more images, and is placed in precise alignment under a plastic lens to create this special effect.

Using high-res images interlaced via Tracer’s software, the company outputs prints and, utilizing its automated manufacturing system, it robotically adheres the print to a lens in perfect register. The company recently licensed the tech to Target and the service is now available on the Target photo site at target.com/c/target-photo/-/N-5a1wg. The resulting print can display up to three images at once by tilting the print back and forth. The technology can also show a short video clip within a single print.

3DTV a Big Factor
Research firm NPD’s DisplaySearch group recently noted that 21.5 million 3D televisions shipped in 2011 in the U.S.—a number that far exceeded industry expectations. The trend in 2012 from most HDTV manufacturers has been to equip more 2D sets with 3D capability, so many consumers are now buying the technology without even realizing it. However, interest remains tepid as lack of 3D content remains a major stumbling block.

While issues remain on the 3DTV front (with the requirement to wear special glasses chief among those), the imaging industry faces a few other questions regarding 3D adoption. “It’s simply a case of having bigger fish to fry right now within the imaging world,” Cummins added. “Making consumers aware of print and photo merchandise services in general is far more important right now, with 3D being just on spoke on that wheel.”