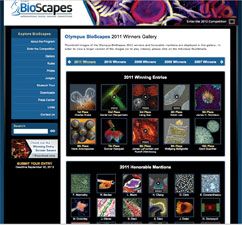 Center Valley, PA—A photo of a curious underwater life-form that bears a striking resemblance to a cartoon mouse earned first prize in the 2011 Olympus BioScapes Digital Imaging Competition, a forum for showcasing microscope photos and movies of life science subjects. The photo, captured using differential interference contrast illumination, was selected from more than 2,000 images and movies to garner $5,000 worth of Olympus equipment.

Charles Krebs of Issaquah, Washington, captured the image, which showcases the amazing movements of a rotifer, a tiny underwater creature with cilia (hairlike projections) that sweep at lightning speed to move food into its mouth. Krebs used a special flash to freeze the cilia’s rapid motion.

Now in its eighth year, the Olympus BioScapes competition is a platform for honoring images and movies of human, plant and animal subjects as captured through light microscopes. Any life science subject is eligible, and entries are judged based on the science they depict, their aesthetics and their technical expertise. Photographers can use any brand of equipment. This year, in addition to prizes 1-10, honorable mentions went to 64 images and movies, and one movie earned an award for technical merit.

“BioScapes images and movies remind us that our world is endlessly beautiful and fascinating,” said Hidenao Tsuchiya, group vice president and general manager, Scientific Equipment Group, Olympus America. “They also open a window to some of the most important and compelling research going on in laboratories around the world. The BioScapes competition, with entries representing dozens of countries and every field of life science, allows Olympus to bring scientists’ amazing images and stories to the world.”

The other Top 10 winners include: 4th, Edwin Lee of Carrollton, Texas, for his movie of Paramecia; 5th, James Nicholson of NOAA/NOS/NCCOS, Charleston, South Carolina, for his image of live green brain coral; 6th, Haris Antonopoulos, Athens, Greece, for a photo of stink bug eggs; 7th, Gunnar Newquist, University of Nevada, Reno, USA, for a photo of fruitfly ovaries and uterus; 8th, James LaFountain of the State University of New York, Buffalo and Rudolf Oldenbourg of the Marine Biological Laboratory, Woods Hole, Massachusetts, for their movie showing a crane fly sperm cell dividing; 9th, Wolfgang Bettighofer of Kiel, Germany, for his depiction of a living diatom; and 10th, Gerd Güenther of Dusseldorf, Germany, for his image of bluegreen algae colonies.

The Judges’ Special Award for Technical Merit was given to Stephen Smith of Stanford University, Stanford, California, for his movie of a “fly-through” of the many layers of a mouse brain in 3D. It was acquired using microscopy and array tomography and stitched together from more than 10,000 colorful fluorescence images.

The winners were announced at a gala reception in Washington, D.C. A selection of the 2011 winning and honorable mention images, along with the 13 award-winning videos, will be displayed in a museum tour that will visit New York City, upstate New York State, Pennsylvania, suburban Washington D.C., and Chapel Hill, N.C., along with other cities. Simultaneously, other exhibits of winning BioScapes images will tour cities across Mexico, South America, Canada and the Middle East throughout 2012. The tour of BioScapes winners is sponsored by Olympus America in cooperation with Scientific American.