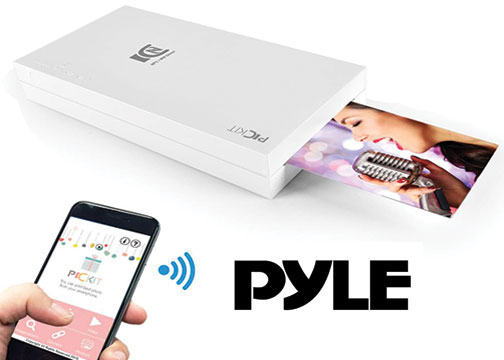 New York, NY—Pyle USA introduced its latest in mobile technology with the user-friendly Pyle portable instant photo printer. The wireless digital picture printer for iPhone and Android devices weighs in at one pound for portability.

The instant photo printer features both Wi-Fi and Near Field Communication (NFC) connectivity technology. Furthermore, it is compatible with both iOS and Android devices. Using Pyle’s free proprietary PicKit companion app, users can print photos wirelessly to have a physical memory of special moments.

The device prints JPEG and PNG 291-dpi images at a photo size of 2.1×3.4 inches. With built-in D2T2 technology, the images are said to have “excellent color reproduction and no unsightly white border lines.”

In addition, to prevent unwanted fingerprints and hassles with cleaning and maintenance, the portable printer has a 10-piece, self-contained cartridge that can be changed in under a minute.

After downloading Pyle’s free PicKit app, smartphone and tablet users can also edit and add custom borders to their prints via any iOS, PC or Android device. The app also allows them to adjust color, add filters and select portrait or landscape orientation.

Pyle’s portable photo printer measures 6×3 inches. Once fully charged, the printer gives users about 25 prints on a single charge. The printer has a retail price of $99.99.

Pyle was founded in the 1960s as a manufacturer of advanced woofers. The company’s reputation grew as customers around the United States used Pyle products and recognized “the power of their scientifically tuned woofers and drivers.”

In the late 20th century, Pyle also established itself as a source for replacement speakers and car audio. By the year 2000, Pyle had undergone a massive transformation, expanding into the nascent market spaces of competitive car audio, home audio, marine audio and professional audio & musical instruments.